Apologies for the late and what is going to be a brief wrap, as we've got a preview to write very shortly.

Last night's game was closer than it had to be, but a win is a win, and giving up the extra point to an Eastern Conference also-ran is not that big a deal, particularly with the Sharks losing last night. But say this for the Thrash, they play some entertaining ass hockey. They're basically Buffalo South, and it's refreshing to see coach John Anderson have enough latitude and confidence from upper management to coach his system and let his players play it, rather than coaching for his job from game to game and trying to trap the life out of teams.

So as far as the scoring, Antti Niemi got beat to his post by Jim Slater, a miscast point man Patrick Sharp fluttered home a power play goal, Kim Johnsson made us all say "Cam Who?", Marian Hossa scored a beatiful shorty, then Johnny Oduya beautifully set up Evander Kane. Maxim Afinogenov beat Duncan Keith to the outside and Niemi clean, Tobias Enstrom buried a slapper on a power play that was the result of a retarded Tomas Kopecky penalty. Dave Bolland dangled his way around Ondrej Pavalec and tucked home the equalizer. Toews with the lone shootout goal. Hawks win and show the kids from Georgia how it's really done. Everybody gets a marker. 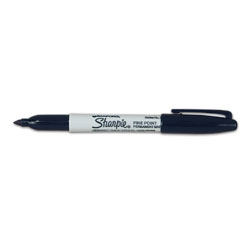 The man with his own signature marker had a goal and two assists last night, and now seven points in three games with Kane and Toews once again as his line mates. Think Patrick Sharp likes playing on the wing again?