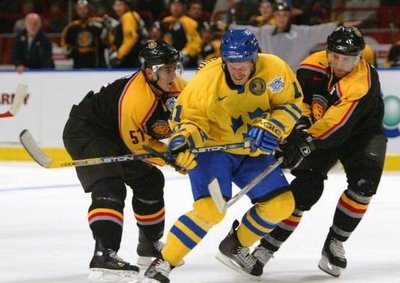 Alright, after yesterday's blistering action seeing victories from the US squad, Canada, and Russia, day two gives us two more scrimmages and one actual game late at night. Here they are:

2:00 PM - Belarus vs. Finland - The contrasting colors from the uniforms in this game might make your retinas burn in Hi Def, as it will resemble a Devils/Nordiques game from 1985. Do not adjust your set, or look for John MacLean in a Belarusian sweater. There's a slight chance that Belarus could upset the perennially ornery Finnish team as they did to Sweden in 2002, but don't count on it.

6:30 PM - Germany vs. Sweden -  Speaking of Sweden, the defending gold medalist Scandanavian Scum begin their defense against a German squad that boasts only seven NHL'ers, most prominent of which are Marco Sturm and Jochen Hecht. The game should result in a roll by Sweden, but one player to watch is Peter Forsberg, if only to see if he's still got it.

11:00 PM - Slovakia vs. Czech Republic - Finally, a real matchup, and what should be a real rivalry as well. While neither team is particularly as deep as they have been in the past, they're fairly evenly matched, and the top-end skill should be entertaining to watch. Czech goalie Tomas Vokoun has been excellent this year, and the Slovaks will be missing forward Marian Gaborik for this game and their game against Russia tomorrow. His absence creates a huge void on Slovakia's top line, which is where Marian Hossa will be skating. Stay up late to make sure Our Panda doesn't come back as brown-brained as Ben Eager.

Alright juggalos, have at it.