For The Right To Tangle With Electric Uncle Sam

Share All sharing options for: For The Right To Tangle With Electric Uncle Sam 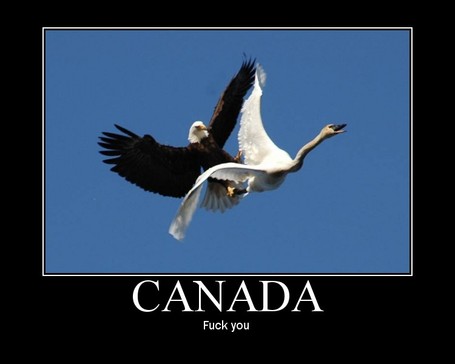 I'll be honest, I'd rather the US play Slovakia.  Though they're hardly pushovers and have a goalie as hot as Ryan Miller in Jaro Halak, they're still an easier test.  I'll be honest, I'm sick of Canada's "Own The Opium" or whatever it's called.  I'll be honest, I want to see Roberto Luongo cry again.  I love watching Joe Thornton spit it on the big occasion.  I'm tired of their sense of entitlement.  I'm weary of the buzz they got from playing a team that didn't bother with defense.  I want Zdeno Chara to put Rick Nash into Whistler, and if TJ Oshie can do it twice in a week, it can't be that hard.  I'm tired of Sidney Crosby's lips.  I want MIke Milbury to gloat over Don Cherry for the next month in Hockey Night In Canada (it's all he's good for).  I don't want to see the Canadians again with something prove.  I want to see what Kane will do in the Chicago dressing room if he's the only one with a gold medal.

But sadly, I don't think I'll get any of this.  I've tried to figure out how Slovakia can do this.  But anything short of a bonkers performance from Halak and Hossa and Gaborik using their  "shinning", I don't see it.

Put your face in and blow.