A couple of things inspired this FanPost. First, after making a line generator -- based on our perception that Coach Q jumbles lines hoping to catch lightning in a bottle -- I figured it would be nice to find out which players actually play best with each other. Second, I was looking for yet another way to procrastinate and realized that NHL game reports like this one aren't hard to parse.

Actually, it's the other way around; I figured out how to write a program to read the reports, and this is just the first (read: easiest) thing that came to mind when brainstorming something statistic-ky to do.

To figure out who plays well with who, I made up a statistic called Mutual +/-. Basically, it is the +/- (even-strength and shorthanded goals for minus against) when two players are both on the ice. Calculating it is simply a matter of noting who is on the ice when a goal is scored and tallying +'s and -'s in a grid.

Here are the Mutual +/- numbers for the 82 games of the Blackhawks' 2009-2010 season (apologies to the sight-impaired; larger version available upon request): 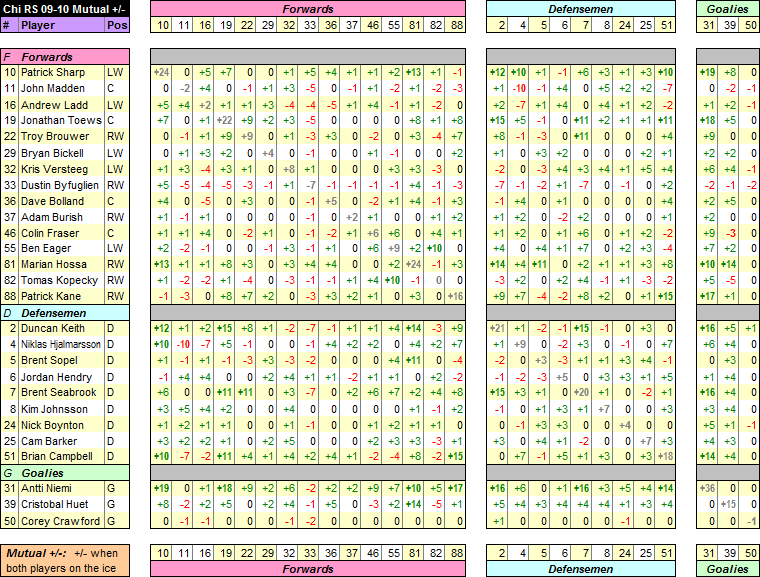 To read the table, pick a player, and as you scan across, each number is your chosen player's Mutual +/- when he is on the ice with the player in that column. The gray numbers running down the diagonal are the traditional +/- numbers for each player over the course of the season (the eagle-eyed or stats-minded among you will notice the table is symmetric across the diagonal).

Note that this isn't the most useful of numbers; it will obviously be skewed because certain lines or pairings will have been more stable, and some combinations may not have been on the ice for long.

Also, these numbers aren't as revealing for forward lines as they are for defensive pairings, because it only considers two players at a time. To figure out optimal lines, the table above would have to be a cube instead of a square!

ADDENDUM (4/14): As requested I've made extra grids that adjust the Mutual +/- numbers by the goals scored (for and against) and TOI for each player pair. Since the goals are the "unit" used for +/-, I multiplied by those to weight productive pairs; for TOI, I divided, to adjust for time spent together.

As a final note: Please go ahead and point out any errors, or any new statistical analysis you'd like to see. I can't guarantee anything (I threw out 90% of the ideas I came up with... I'm being Kaner-lazy at this) but if there's any light to be shed, I wouldn't mind giving my new toy a spin.

Also, thanks for putting up with some pretty heavy writing... without pretty pictures (like gmh's) to wash it down.