Share All sharing options for: Carnac Comes To Second City... 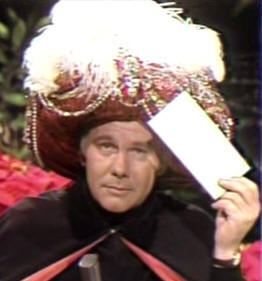 Sam: It comes time for the three of us to predict the future.  I'll start, and my comrades will be along later to give their two cents.  I always try and follow my first instinct when I find out what the matchup will be, and last Sunday it was Hawks in 5/6.  While I've had all this time to tie myself in knots about what could happen and what could go wrong, as I've delved deeper into the Preds and the numbers for this series I'm more convinced in that assessment.  With Nashville, there just doesn't seem to be enough "there" there.  Are they disciplined and hard-working?  Of course.  You know what that gets you?   A playoff spot.  But to advance in the postseason, you do need some sort of inspiration.  It's hard to think of a team that simply worked its way far in the playoffs.  Even the Oilers of '06 had Pronger, Smyth, Hemsky.  And the Hurricanes had Eric Staal, as well as playing in a much weaker Eastern Conference.  While I have no doubts the Preds will make every game tough, the Hawks depth should win out as long as they come out with the same level of effort as the Preds do.  Even if Weber and Suter can keep Crush, Kill, Destroy in check, I'll happily see what Kane can do against the likes of Dan Hamhuis.  Then we get to our 3rd and 4th lines, which are simply better than anything Nashville has to offer, and by some margin.  A lot's been made about Pekka Rinne's finish to the season, and while impressive, digging a little deeper finds us discover that of the last 18 games played, 8 were against playoff teams.  He gave up 3 goals or more to five of those.  Antti Niemi had the same amount of starts in that time frame against playoff teams, and gave up 3 or more to only three of them.  This advantage the Preds fans have been bleating on about for a week now isn't as large as they'd like to think it is.  If the Hawks play defensively anywhere near where they are capable, how many goals are the Preds going to score?  I just can't see it, kids.  Hawks in 5, maybe 6.

McClure: Sam stole a lot of my thunder with what he wrote, but I see things shaking out very similarly. We've heard all week that the Preds absolutely do not trap, but we've never once heard what it is they actually do well. All the team statistics both offensively and defensively are emphatically middle of the pack, so again, it seems that hard work is what they have going for them. But they're going up against a team coached by Joel Quenneville, and boasting Jonathan Toews and John Madden, three people who have never once been accused of mailing it in. If the Predators and their fans are banking on a goalie meltdown as their only avenue of victory, while justifiable on their part, it's not as likely as they're probably hoping. Work ethic, the Hawks frustration, and shitball ice conditions in the warm weather at the UC will garner the Preds two wins in this series, but I think the Hawks simply have too much. Hawks in 6.

Killion:  Thanks to work this morning (which was horrible) I get to go last and tell you nothing new in the third spot here.  I've said it before but I'll repeat myself here.. I think the Hawks are going to come out a little shaky to start this game before finding their legs in the late second or maybe not til the third.  Niemi will be tested earlier and far more often than we'd like but if he will need to just be good, not great, and we know he can do that.  Once the Hawks get rolling I think we'll see a much better game on Sunday.  Once the series gets to Music City I think we'll see the Preds take one... maybe not til they're fighting off elimination though.  While the Predators are probably better than most of think, I just don't see them winning 4 of 7 against these Hawks unless the wheels completely fall off.  I'll go with the Hawks in 5 games.