Going into Thursday night's game four, there were numerous questions swirling around Blackhawks Nation. Would Brian Campbell play? Would the Hawks respond in what was for all intents and purposes a must-win situation? Would the Hawks match the Predators effort level? And would the Hawks best players make themselves noticeable during the game?

The answer to all of these questions was a pretty emphatic "yes".

Brian Campbell played (albeit with severely limited minutes),  and the Hawks showed the same level of desire from Jump St. as the Preds, which resulted in the names that we're supposed to see scattered all about the scoresheet present. Patrick Sharp opened the scoring with a power play put-back in the first, Jonathan Toews harpooned a Marian Hossa centering feed in the second, and Sharp would bookend the scoring with a wicked wrister from the high slot that was blown by Rinne. At the other end, Antti Niemi made it stand up with his second shutout of the post season. Some thoughts - 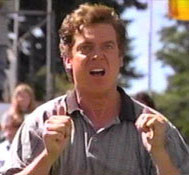 While it would have been fitting to give the award to Antti Niemi, who posted his second win and shutout of the playoffs last night, the award goes to Shooter, who potted two goals that gave the second line some punch and provided the scoring depth that made the Hawks so dangerous earlier in the year.