Share All sharing options for: April 28th - Beard Of The Day - Kyp Malone 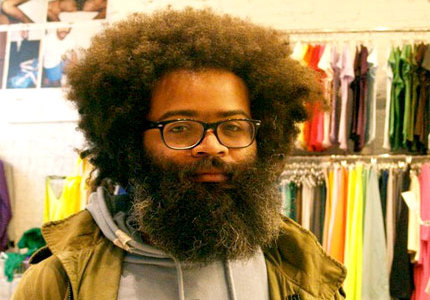 Today's beard comes with a nice companion piece of an afro from guitarist and sometimes-vocalist of the band TV On The Radio, Kyp Malone. The amount of effort to maintain that complete aura of hair must truly be staggering, as well as merciless on the shower drain. But Malone pulls it off with aplomb, as he does so frequently in his work with TOVTR. And if you don't think you're familiar with the band, you'll probably recognize the below jam if you've viewed pregame warmups at a Hawks game at pretty much any point during the last three years. And the video is kick-ass as well.