Phew. So we've survived Round 1 of the Joel Quenneville line scrambling carousel. At the end of the regular season, we had a money line of Sharp-Toews-Hossa, also known as the "Hammer of the Gods," and a fourth line that had finally found some chemistry and was chipping in some offense to boot.

What happened? After stumbling upon the wall that was the Nashville Predators blue line (and you might argue, our own, as far as clearing it was concerned), Coach Q jumbled, we mumbled (and moaned), and, well -- maybe it worked!

How do we tell? Well, we can use the stat I invented: Mutual +/-. For those of you who don't remember that FanPost (and let's be honest -- who did?), Mutual +/- is just like regular plus-minus, except that it's calculated for each pair of players on the team.

The objective is to answer the question: how well did each player play with everybody else? Well, let's take a look at the Blackhawks' Mutual +/- for the Round 1 against Nashville... 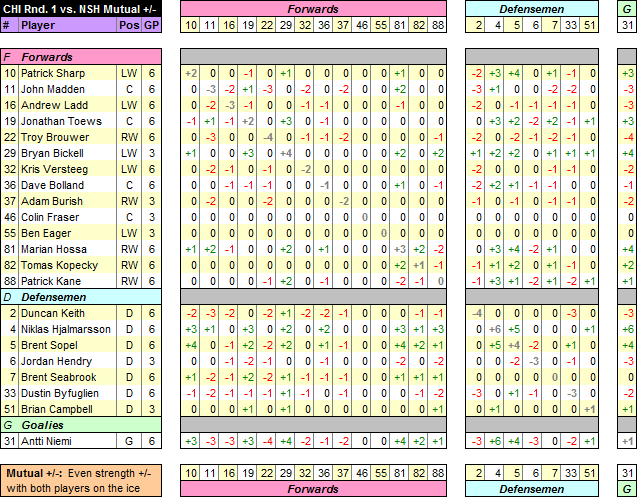 (remember: the gray numbers along the diagonal are each player's traditional +/- for the series)

Thanks for reading -- I know you were here just for the free food, but I don't have any edible treats this time... but instead, you get a stats-post reader's reward: enter the coupon code PUNCHTHECABBIE at checkout and receive a special discount on The Days of Our Defense from Amazon.com!*

* Neither VerStig nor Second City Hockey are in any way affiliated with Amazon.com. Though, we wish CNS was!