Share All sharing options for: May 11th - Beard Of The Day - Dave Grohl 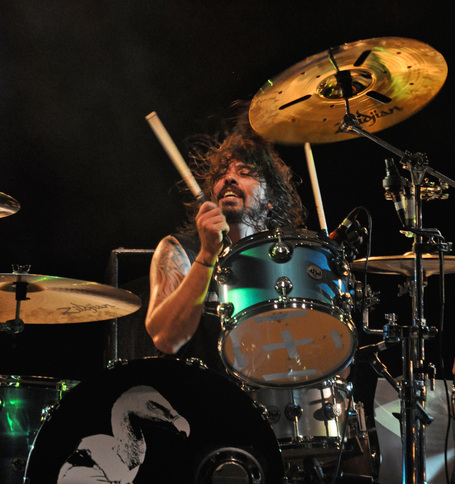 Today's beard needs little introduction, but we're going to give him one anyway. As one of the more prolific drummers of the modern era of rock n' roll, Dave Grohl is never lacking for projects, and chances are that if he drums on the record, it fucking kills. Songs For The Deaf? Check. With Teeth? Check. Them Croooked Vultures? Check. Killing Joke? Check. Tenacious D? Check. Shit, even Probot was pretty good. The guy even played drums for the Backbeat band for fuck's sake. Oh yeah, he also played drums for a little-known band called Nirvana before he did all this mercenary type stuff. In his spare time he's been trying his hand as the singer and guitarist for some generic arena-rock outfit called Foo Fighters (whatever the hell kind of rock band name that's supposed to be), but hopefully that just ends up being a phase before he resumes bludgeoning ears full-time from behind the kit again.