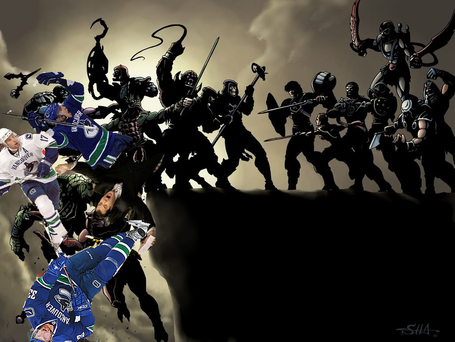 okay, maybe I'm going too far with this...
CORSI
SHIFT CHARTS
Now that we're in the morning after, I'll just go with bullet points again:
-While he didn't have a great game, you can't help but feel good for Troy Brouwer.  He was still shaky in his own zone, had a bad turnover or two, took a bad penalty, but he shook all that off to score a priceless goal, and the kind of goal I doubt Tomas Kopecky could manage (though Kopes certainly hasn't been bad).  That's the kind of instinct and touch we've seen all year from Brouwer, and may need again before it's all over.
-Looking at the Corsi it's hard to believe that Bolland's line was so negative.  Once again, Bolland had his best game of the year, including a backbreaking shorty in the last minute of the 2nd.  He broke up numerous offensive chances for the Canucks, and finally seems to have his positioning sorted out.  He'll need it again, there's no let up from the squad on the horizon.
-Thank god Kris Versteeg figured out you don't pass to Andrew Ladd on a 2-on-1.
-Well, it wasn't a bust out game like I thought, but Sharp-Hossa-Brouwer still had a definite impact.
-Is there anyone on the planet who enjoys ripping an opponents heart out more than Patrick Kane?
-In fact, that's what the whole team did last night.  They got through the early storm, and then quickly stomped out the flames that were left.  When the Canucks had anything resembling life in the 3rd, the Hawks snuffed that out like the playground bully beating up a toddler.  Isn't that what Cup teams do?
-You'll see the second biggest CORSI number belongs to 51 Phantom.  This is a good thing.  Campbell could have a big series coming up, I don't think the Sharks, though quicker than Vancouver, will be as physical.  Even if they are, we know they're going to want to push it as much as the Hawks do, and he'll have plenty of space to exploit.
-First look ahead:  I have no handle on this Conference Final yet whatsoever.  If you said to me before the playoffs the Hawks would get the Sharks this round, I would have said Hawks in 5.  But then Joe Pavelski happened.  And then Joe Thornton happened.  And then Nabokov's stellar performance in Game 5 happened.  So I really have no idea.  I still believe if Jumbo Joe has Captain Marvel up his ass for a whole series, he'll go back to passenger-form. But I don't know that now.  And I don't know that Joe Pavelski isn't going to murder us, either.  What I do know is that the pace of this series is going to cause a few of us to pass out.  We'll study it more in the days ahead.
-Podcast coming tomorrow night or Friday morning.  As well as blog roundtable.