Share All sharing options for: May 13th - Beard(s) Of The Day - The Bearded Men Of Space Station 11 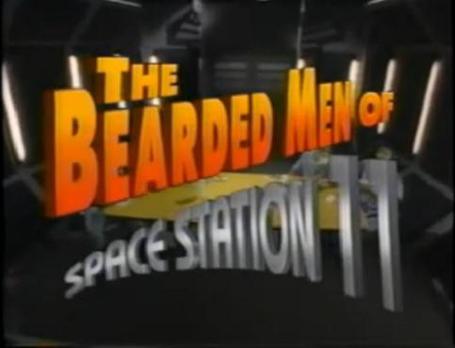 As an adolescent in the early and mid 90s, one show that would end up being highly influential on what can generously be described as my depraved sense of humor was The State on MTV. The sketch comedy show had a brief four season run, but its cast members are some of the most recognizable in modern comedy even many years later in Tom Lennon and Ben Garant (Reno 911), Michael Showalter and Michael Ian Black (Stella, Michael and Michael Have Issues), David Wain (director of Role Models), Ken Marino (Party Down)....the list goes on and on.  Even being unemployed over last summer, when the complete series finally came out on DVD after nearly 10 years of waiting due to corporate red tape bullshit, I went and purchased the set the day it came out. Such is my devotion to The State.

One sketch, as featured below, is patently silly, but such was the nature of a show that featured Blueberry Johnson, Porcupine Racetrack, The Old Fashioned Guy, Doug (I'm outta heeeeeere) andLouie (I wanna dip my balls in it!). It's also informative, as we learn that beards do not grow in space...but they kinda do sometimes.