Well that was fun, wasn't it?  If not heart attack inducing.  So before we move on from genus Orcinus to superorder Selachimorpha (sweaters, not sushi), let's take some time to digest what we've had so far.

If you've been following my FanPosts, you should be familiar with my Mutual +/- statistic for tracking line/pairing chemistry:

Of course, we all know how often our lines have been shuffled by Evil Genius Q, and perhaps this time for the better.  We got a bonafide chicken

checking line that shut down the Sedins to go along with the emergence of Buff McNugget as Vancouver fans now must be having nightmares about. 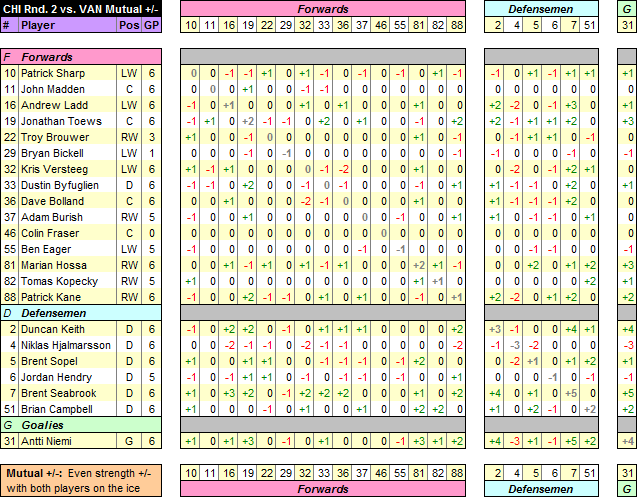 For your enjoyment, this time I've provided a "Mutual TOI" chart if you're obsessed with this enough to care about how much time the players spent on the ice together (you can actually see the lines pretty well with this).

* One thing I noticed recently (and much too late) was that Behind the Net has a fantastic piece on plus-minus that addresses deficiencies like this... and how to adjust by the quality of opposition and the quality of teammates (the "BtN rating" is +/- adjusted by the rest of the team).  Hawerchuk suggests adjusting by what I called Mutual TOI, and the spirit of what he did is similar to what I'm doing, but on a bigger scale -- and it's probably more meaningful.

** The sample size is still small and comparing Rounds 1 and 2 may not be hugely meaningful... but for the curious, I added up the charts for both rounds to get Rounds 1 & 2 Mutual +/-.

The question came up on one of the game threads -- which of the Blackhawks lines is going to match up with the Sharks lines, in particularly those belonging to Big and Little Joe?

I promised I'd try to adapt my statistic and mightily morph it into what I'm calling Cross-Mutual +/-, a measure of +/- for each 'Hawk when facing each Shark.  I made this from the 'Hawks point of view, so a plus for one of our guys is a minus for one of theirs; here's what I came up with (click to see full names for the Sharks): 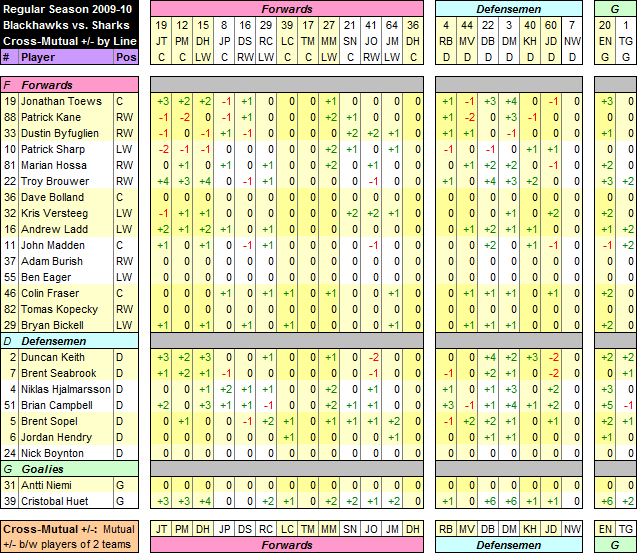 ...and a Cross-Mutual TOI chart for this, too.

(keep in mind that the 'Hawks took the season series 3-1-0 and outscored the Sharks 17-11 in the process; the playoff version of these numbers are unlikely to end up looking like this)

That's not all.  But the rest is up to you guys -- I hope this post provides some good discussion points far beyond what my newbie hockey eye test can tell me.  So, to the comments section!  (I'll try my best to update the chart if the lines need to be rearranged)

Free Food... courtesy of the the City of Vancouver

I know that some of you show up to these geekfests just for the food, so lucky for you, Mayor Daley made that bet with Mayor Gregor Robinson of Vancouver at the start of the series.

Correction:  What I have here is last year's bet... I put up a new FanPost (Another Mayoral Hockey Bet!) for this year's (and the one with San Jose's mayor), but you guys can chow down on this stuff as your reward for making it through this post.

A similar bet was made last year, and as promised, payment was made: 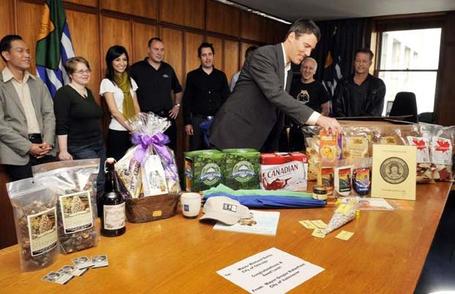 Since our Vancouver fan friends so largely exceeded our expectations for classiness, I thought I'd include links in case, as their mayor said, we end up giving them "a bit of a beachhead there for local products."  Not to mention with how healthy this stuff is, it might be just what our stressed hearts, stomachs, and livers need right now: 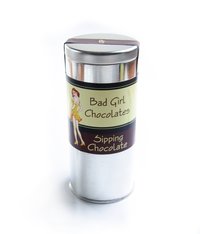 (Quick Plug:  If you're in the New York metro area on Sunday, I'm trying to get a meetup going... check it out)