Share All sharing options for: May 19th - Beard Of The Day - Kyle Kinane 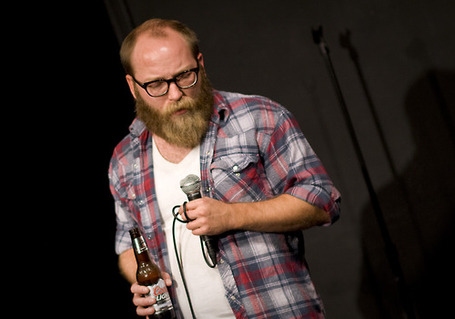 Now that the Hawks are finally coming home to Chicago after more than a week on the road in both Vancouver and San Jose, I thought we'd acknowledge that with a beard that's also a Chicagoan displaced on the west coast - stand up comedian Kyle Kinane. After cutting his teeth here in Chicago, Kinane headed west, which has led to a jump start in his career that's included a walk-on role in Funny People, opening for comedy giant and blog favorite Patton Oswalt on tour, and recently releasing his debut comedy record Death Of The Party (even the track list is hysterical), all while rocking a very lumberjackish beard, beer in hand at all times. Big things are clearly headed Kinane's way, and hopefully the same holds true for his hometown Men of Four Feathers.