Share All sharing options for: May 22nd - Beard of The Day - Kevin Smith 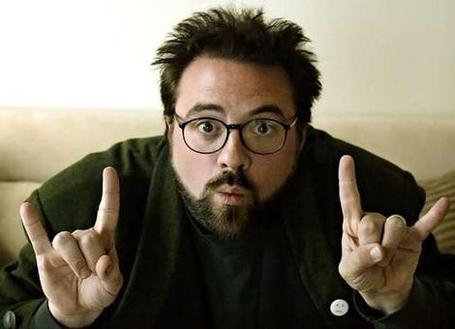 With apologies to GenPabloSecobar, who put up a fan post, it's simply too early to use your choice, but we sincerely appreciate you trying to put up something in our absence. Also, many apologies for not putting up a full wrap with thought's from last night's game, but Sam has an issue of the Indian to prep for tomorrow's game, Killion was working, and I was helping a friend move all day. Unfortunately extenuating circumstances interfered with our responsibilities here, and during these times it's important that we at least keep you up to speed on these things.

Anywho, today's beard is filmmaker/comic nerd/self-promoter Kevin Smith. Smith rose to fame writing and directing comedies with insanely quick-witted and profane (albeit unrealistic) dialog, comic book adoration, and limited directorial skills. Smith is also a huge hockey fan, and was kicked off of his NHL.com blog he wrote about his hometown Devils for being too profane. When he's tried to venture outside of his ViewAskewniverse of characters, the results have been pretty mixed (Jersey Girl, CopOut, Zack & Miri Make A Porno), but much like The State, those films that he made during my delicate formative (Clerks, Mallrats)  years will always be in my own personal canon. Plus, he always manages to work some manner of hockey reference into any of his films, which is a plus.