Share All sharing options for: May 28th - Beard Of The Day - King Arthur 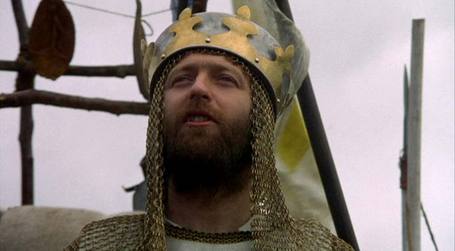 On the eve of  the Blackhawks setting forth on their quest for hockey's Holy Grail, we pay tribute to the man who originally sought it, King Arthur. While Arthurian legend varies wildly depending on the source, one thing most seem to agree on is that Arthur was sent on a divine journey to seek out the chalice used at the Last Supper. He and his K-nnnnnnnnnnnnigits of the Round Table set forth to find the Grail, and after a great deal of hardship, sacrifice , and determination, Sir Galahad, purest of the K-nnnnnnnnnnnnigits, by most accounts finally secured the priceless artifact.

And whether you believe Arthur was crowned by extracting Excalibur from a stone or having the scimitar lobbed at him by the watery tart that is the Lady of The Lake, the fact that he was given the throne does not detract from the fact that he earned his legendary status through his actions, least of which was growing and maintaining his magnificent beard.