May 4th: Beard of the Day - Dr. Grigori Perelman

Share All sharing options for: May 4th: Beard of the Day - Dr. Grigori Perelman 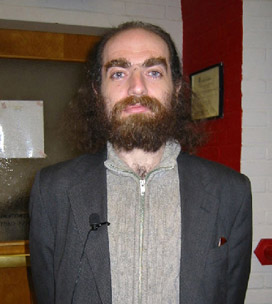 I know, I know... this is a bit of a random one.  You probably haven't heard of Grigori Perelman.  Here's what you need to know about Perelman though... he's much much smarter than you.

Perelman was born in Leningrad and it became apparent at an early age that he was freakishly good at mathematics.  He was recently in the news after refusing to accept a $1 Million "Millennium" prize for solving something called the "Poincaré conjecture".  I have no idea that is.. but it was originally posed by Henri Poincaré in 1904 and remained unsolved for almost a century.  That is until Perelman proved it in 2003.  It was so complex that it took several expert mathematicians years to go through Perelman's work to figure out if he was correct. Read about it here if you'd like.. but none if it makes any sense to me.

If that's not badass enough, Perelman lives the life of a recluse, still living with his mother and sister.  He wears the same clothes every day and refuses to trim his beard.  When a reporter came to question him about refusing prizes and awards he only responded "You are disturbing me. I am picking mushrooms."  Perelman has given up on mathematics recently, largely because of his perceived moral and intellectual failings of his peers.  Instead, he evidently spends his time practicing the violin and playing table tennis in his apartment against the wall.