Share All sharing options for: May 5th - Beard of The Day - Jim Martin 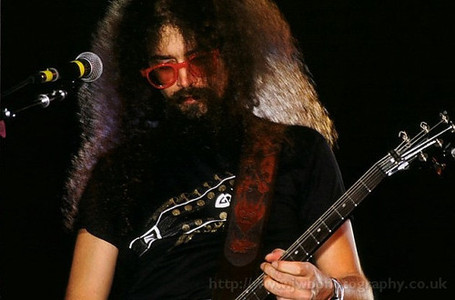 In light of pointing out that Brent Seabrook bears a striking resemblence to Faith No More, Mr. Bungle, Fantomas, and countless other projects' front man Mike Patton, today's beard is one-time Faith No More guitarist Jim Martin, who famously rocked an epic beard along with a wild mane of hair and his trademark red sunglasses. Martin was eventually fired from Faith No More after being labeled a malcontent when the band's sound moved further away from his guitar shreddery and more into Mike Patton's weird tangents, but their best work came with him, particularly on quite possibly the weirdest major label album ever released, Angel Dust, which was viewed as career suicide at the time after the success of "Epic" and The Real Thing. But when the shit slays as hard as "A Small Victory" (which would be nice tonight), there are plenty of reasons to keep going back to the record.