So apparently Kills has fallen into the same blackhole of death that possessed Kim Johnsson, so I'll fill in here.  By now, you've all seen the game or read other wraps so we'll just hit the main points, shall we?

-The three writers...oh sorry, I guess now it's the three original writers of this site have caught a fair amount of grief for our aversion to Dustin Byfuglien.  Last night only proves our point.  If Buff wanted to, he could score 30 goals, maybe even 40.  Quite simply, when he's in the mood, he is unstoppable.  You can't move that much size legally if your a defenseman.  He makes life hell for goaltenders.  When he's physical, he creates so much space for his linemates.  But we only see it against Vancouver in the playoffs.  Granted, that's about the most important time to bring it.  And last night, you could argue Buff played the best game of his career.  He's clearly relishing being the villain, because when you're that big who the fuck is going to make you pay for what you say and do?  His celebration after his second goal contained all the bravado and "what the fuck you gonna do about it?" sneer that this team as a whole flashes when they're on their game, and makes me love them so.  The Canucks, by trying to do the opposite, made Byfuglien the story of this series before it started off the ice.  Now he's the story on it.  You can bet your sweet ass he'll get called for one goalie interference call Friday by some worked officials, but I doubt that'll stop him.

-And quite frankly, what are the Canucks going to do to stop him?  Not much when you role out the jokes that are Kevin Bieksa and Shane O'Brien.  Drinky McGoo (O'Brien) was on the receiving end of when Marian Hossa hits his "I'm going to score now" button.  He got worked over like a teenager in Lawrence Taylor's company (too soon?  too soon) in the corner before getting beat to the net for the rebound by a good five feet.  That's only Marian Hossa you're letting walk out there kid, he doesn't have 300 career goals or anything.  Bieksa wasn't much better, and why he felt the need to yap at Byfuglien at the final whistle is anyone's guess.  That dude just kicked your ass all night, Juice.  Why don't you beat your useless ass back to the dressing room and lick your wounds?  Naw, too easy, right?

-Alex Burrows is an embarrassment.  I can't even imagine how Canucks fans could defend him at this point.  You can yap about his 35 goals during the year, but he went from Ghost to actively hurting the team last night.  Oh sure he scored one goal, but it would have been the tying goal if he hadn't spent his time trying to goad noted tough guy Brian Campbell into a fight (and I have no doubts that 51 Phantom could probably kick the shit out that Sedin cum-guzzling douchebag anyway).  Then in the 3rd, when Bolland is tied up with Daniel Sedin, who is at least five inches taller than Fabulous Weapon and probably has what, 40 pounds on him, Ass Rash has to protect the twin by punching Bolls in the back of the head.  Way to make yourself noticed jerkwad.  I know Burish can be a tool, but at least he answers for his shit every so often.  So does Versteeg occasionally.  All Burrows has served to do is not score and rile the Hawks into beating his ass more.  Well done.

-Check these out: CORSI and SHIFT CHARTS.  While I've seen some made of keeping the Sedins off the scoresheet, it appears it was only out of pure luck, pure luck being defined as your Finnish goalie turning into all the bricks of the wall (but remember, Tukka Rask and Antti Niemi have nothing on Jimmy Howard).  Corsi's all in the -10 range is not good, though I'd like to see what these numbers look like for only Periods 2 and 3.  Either way, Bolland must be a complete bitch to play against because when Daniel Sedin gets up in your grill, you know you've accomplished something.

-Luongo just coughed up another rebound.

-Brian Campbell is starting to round into form, something about the Canucks I guess.  This is a very good thing.

-Buff's heroics will outshine Niemi, but he provided the platform.  He was nothing short of stellar in the 1st, matching what his counterpart had done in Chicago.  After bailing his team out, they returned the favor as he didn't see as many shots in the final two periods as he did in the first.  I can only think of two or three big saves he had to make in the final frames, where it seemed like every one was in the opener.  Keep this up, we're going a long way.

-And another rebound given up by Luongo.

-In my mind, the Hawks cannot let the Canucks off the ropes Friday night.  They have all the evidence they need to see what happens when you do, i.e. this series last year, and the Preds this year.  Lose Game 4 and this series starts all over with the Canucks having the momentum.  Win Game 4, and you're in the same zip code as ending it.   We'll see what kind of balls Vancouver has (and seriously Nucks fans, throwing trash again?  GROW. THE. FUCK. UP).  In past years I would have laughed at that statement.  But this Canucks team is different, and I won't believe they're dead until there's a handshake line and they're the ones with their heads down.

-McClure and I were discussing if this was the Luongo meltdown game or not.  He says no, I think it is.  Either way, he was just plain bad, and he can blame the refs or the dirty, big, mean Hawks all he wants.  But Bob is going to have to realize his clown car of a defensive corps are not coming to clear those rebounds, and he should probably suck them out as best he can.  If that wasn't the Luongo meltdown, and there's one coming, well, than the Whalers West are in a world of trouble.

OH, BOTTOM LOUNGE TOMORROW: Yeah, I know, we're 0-2 there when having an official watch, but deep down you know that's bullshit.  They sent me the specials, they are as follows:

They'll also be doing their shoot the puck thing at intermissions for hats and stuff.  So kick off the weekend with us, you won't regret it.  Well, actually, you'll regret it a ton on Saturday morning, but it'll be worth it.  I think.  Maybe.

This Belongs On The Front 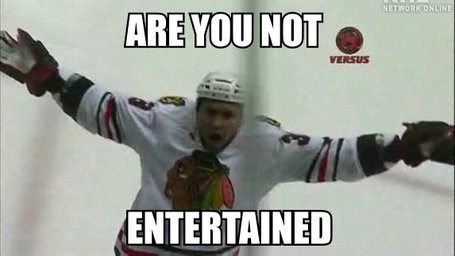