May 9th Beard Of The Day - Axl Rose

Share All sharing options for: May 9th Beard Of The Day - Axl Rose 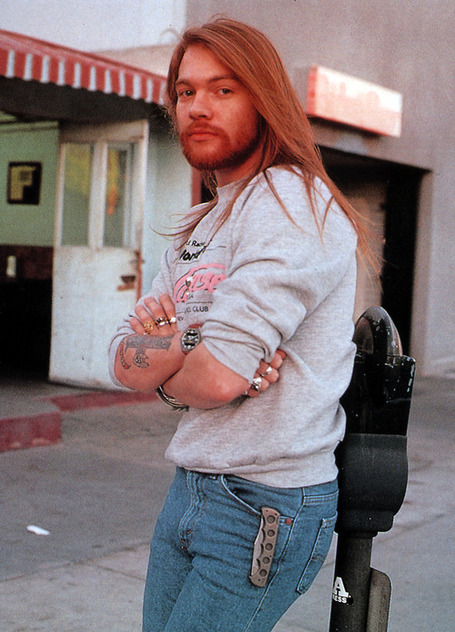 Incomprehensibly weird?  Yes.  Total douchebag?  Almost certainly.  Single-handedly destroyed one of the best bands of the past 30 years?  Undeniably.  But Axl will go down as the last true rock star, and exhibited a swagger and strut that the Hawks have captured the past two games, and will need more of tonight.  He also occasionally rocked an immaculate ginger beard, which makes our Head of Cyber Division happy.  Whatever you think of Axl, he'll go down with Jagger and Plant and Stewart as one of the greatest frontmen of all time.  His witch's cackle of a voice is one that is unmistakable.  Whether onstage or off, you could never take your eyes off him.  And though GNR became bloated and decadent under his watch before completely transforming into something unrecognizable, I know a majority of you still go back to Appetite and blast it at ear bleed volume.  Is there a better song to play disgustingly loud in your car on a warm, sunny day than Mr. Brownstone?  I doubt it.

I take no shame in admitting I saw one of the later incarnations of GNR in Boston in 2002.  It was when Robin Finck and Tommy Stinson and Buckethead were in the band.  I told everyone I wasn't going to see Guns N' Roses, I was going to watch Axl put on a show.  And through those lenses, he put on a show and a half.  His voice still had all its scare-mom menace, he tore through Out Ta Get Me like he wrote it yesterday, and slithered across the stage all night and had every woman in the arena at a near-faint.  Yet, afterwards, you couldn't help but wonder what it would have been like to see that 10 years eariler, with Slash and Izzy and Duff.  Ah well, the curse of just being too young at the time I guess.

Anyway, I'll be back later with the preview for tonight.