The More I Get The More I Want: Blackhawks 4 - Lanche 0

Share All sharing options for: The More I Get The More I Want: Blackhawks 4 - Lanche 0

Finally, two points against the Avs. From early on in the first the Hawks looked in control and didn't give up for most of the game, save a few dangerous shifts in the third where the Avs started to swarm.  As far as I remember, the game was a lot more physical than the other 3 games so far this year.  Colorado had the overall advantage in hits (35 to the Hawks 26) but it was the Hawks who were fighting their way to the puck and winning battles along the boards.

Troy Brouwer was the first to benefit from hard work towards the puck as he found one of Peter Budaj's many rebounds in front of the net and took a quick whack to put it past Budaj.  Exactly 40 seconds later, Dave Bolland benefitted from yet another empty net goal as yet another Budaj rebound found its way right to his tape for the easy put in.  That puts Dave Bolland firmly atop the leader list for empty net goals despite what nhl's stats page may say.  Perhaps not satisfied though, Bolland created a pretty goal in the second with a nice pass to himself off the boards and found Da Pope-Ah who was going hard to the net for a nice tap in.  A big thank you to David Jones who had his stick absolutely no where near the ice while trying to defend Pisani.

The Avs managed a few solid shifts that pinned the Hawks in their own zone but it was only Jack Skille who scored off (say it with me now) another rebound off Budaj.  A solid game from top to bottom, back to front.. so lets get to the bullets

It could be Corey Crawford, who got his second shut out in a row (including a great save on a breakaway).  It could be Dave Bolland who got two points and a great game.  But when you're presented with a picture this good - you use it.  It's da pope-ah! 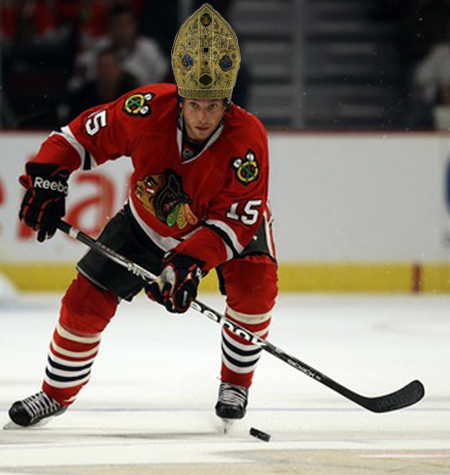 Thanks to One TImer for the image