Share All sharing options for: SCH's All Star Fantasy Draft

Because we're here to give you the most useless content imaginable here at SCH, Hack, Killion, Sam, and I all sat down at our respective computers like total poindexters tonight to hash out the All Star rosters ourselves. Sam and Kills were on one team, and Hack and I on the other. We adhered to the rules as best we could with how the selections were supposed to go since there were no alternates picked yet, and one team certainly followed the rules better than the other, but you'll have to slog through the entire mess of a chat transcript to see just how it all went down. Read it after the jump, if ye be of stout heart...

Sam:  We select Sidney Crosby with our first pick.  With our second pick, we select what's left of his brain

Killion:  Well then.. I've always wondered what Ovechkin would be like on Crosby's wing.. so lets find out

Hack:  I'd kill for that widows peak

I bet sam would too

Sam:  Is now ours

Sam:  Hey Matt, why don't you share with the class what you've said about Hack's dome in the past?

Killion:  Cause some infighting... i like it.  good strategy Fels

McClure:  If you think that trying to initiate some intra-team squabble is going to keep me from taking Jonathan Fucking Toews next, you've got another thing coming

Because it's not. We take Toews.

Hack:  when you say that, I think Barkley, turrible

Killion:  With the fourth pick.. we take whichever one of those Sedins that plays center and scores all the points

Sam:  Stunning intellect on this side.

I think it's Herbert

Killion:  Cool Runnings is on HBO..

just thought you all should know

Sam:  So's Jay and Silent Bob strike back, but the part where Elize Dushku touches herself is over.

Hack:  So we're going with Chara

Sam:  They're having a party

Well, in that case, we select the blackened terror of Jonas Hiller and his mask

McClure:  Gaze not into the abyss, as the abyss gazes also into you, bitches

Killion:  We also demand you pick Andrei Kostitsyn so Thomas can take another whack at him

Sam:  We demand that you pick Andrei Kostitsyn because he'll have the best drugs.

Killion:  Have you seen Roloson's all white mask?

McClure:  Because he sucks and he's a dickwad, not because of his mask

Sam:  Wouldn't be a SCH party without a dickwad mention

Hack:  speaking of dickwads, you guys are up

My eyes hurt from the glare of intelligence

Hack:  Our eyes hurt from the glare of King Henrik's bling, so we'll take him

Sam:  We take Toby Enstrom and his special long stick

Which does better work than Hack's bald head, doesn't it McClure?  Eh?  Eh?  Is this beer on?

Killion:  Enstrom kind of looks like a goomba.. but only from the live action mario movie

Killion:  by the way.. this spreadsheet thing is awesome Hack.

now that I've figured out how to use it

Killion:  Team Fels/Killion is trying to break your heart... we take Patrick Sharp simply so McClure can't have him

Sam:  I can't tell if this is entertaining yet

Can you believe that brilliance?

McClure:  Fine, keep him. See if I care.

get the cigs and hookers.

McClure:  Seems fitting he'd be in an all star game on tobacco road

I wonder if he'll do his pose in honor of Petey Pablo, the only rapper from North Carolina I can think of

Sam:  He'll do his pose when he bails Kaner out of jail.

McClure:  Well, since you had to trifle with our taking of Patrick Sharp, we will take a big fucking machete to the umbilical cord and select the other Sedin, Cornelius.

Sam:  We were hoping you would do that.  Moronic pick.

Killion:  Played right into our hands

Killion:  Well.. we're bound by the rules of the game here.  We have to take the only goalie left on the board.  Flower it is

Killion:  hopefully he and Price don't get stuck in a dressing room pose-off

Sam:  You're going up dere you fucking fuckface

Hack:  we're gonna take Duncs, just because we dare forwards to block shots in the all star game

Sam:  Thank you for stating your obvious movie knowledge.

You think people will have read this far?

"This one's called, 'me fans are stupid pigs."

YOU USED TO BE ABOUT THE MUSIC

Hack:  I can't think of anything witty to say, Malkin

Sam:  If you're still reading this, then we can't help you

Hack:  which for everyone else it's a layup

McClure:  Not as hilariously bad as the mouth agape look on Geno's face

Sam:  and his scooter

Killion:  does he have to ride the scooter to the game?

McClure:  I think so, just so some hilljack can throw an empty tin of Copenhagen at him

I'm getting our Matt's confused.

Sam:  Whatever, I got mine

Killion:  you tipped our hand

Sam:  That's exactly what I wanted you to do!  Mwahahaha!

McClure:  He probably got it from Hartnell

Sam:  Fine, we take Loui Eriksson, so now we have Sharp and Diet Sharp and McClure can't have any Sharp

Sam:  Is this over yet?  I stopped caring long ago and no one will have read this far.

Hack:  oh they will read

They'll read these picks and they won't know why

Hack:  Like when we take Marc Staal and everyone let's out a big AND 1 OOOOOOOHH shit, at their draft parties

Killion:  someone check on McClure.. he may be choking on a hotdog righ tnow

Sam:  This draft will remind people of what was once good, and could be good.

It was the daughter

and if McClure's chocking on a hotdog, it's because someone intentionally shoved it down his throat

Killion:  Marc Staal isn't in the all star game

According to this neato spreadsheet

And the spreadsheet never lies, Kills

McClure:  Words to live by

Hack:  except when I called M Staal E Staal, it lied for a second

Sam:  No, reality shifted for that period of time

Killion:  ahh.. i still have him as a second E Staal

Sam:  He was actually named Eric for the time he was listed as so on the sheet.

Why haven't you picked yet?

Killion:  i got confused

and had to get a beer

Sam:  Wait you weren't just taking Staal were you

you forgot to evaluate the pick

Killion:  Just to speed this along.. We'll take Burns because he's got an awesome beard

at least in this one picture I'm looking at

Hack:  pictures in the spreadsheet, boss

McClure:  As the door hinges at the Whirlaway can attest

Killion:  i love beards, shots, and making an ass out of myself

Sam:  Send beard, shots and money!  The shit has hit the fan!

I saw a werewolf drinking a pina colada and trader vic's...

His hair was perfect

McClure:  We're only doing that because this game won't involve much of the defensive zone, where we know Boyle has issues

Hack:  you guys somehow have to take 2 dmen in 1 round

so you'll have to put a forward back on the board

while he eats cereal

And you can have Buff

You HAVE to take Buff

We already have 6 D

Hack:  we already have 6 D men

Sam:  Whatever, we're setting up our roster however we please

Hack:  so let's just toss crosby back on the board and you can put buff in the number 1 spot

McClure:  But who will think about the children!

Sam:  No, we take Karlsson.  Your pick

McClure:  We take David Backes just to deal with the sheer amount of Canadians on your squad

Sam:  Corey Perry to up the vagina level on our team

And Backes is an awful pick

Hack:  not as awful as you taking buff

Sam:  We haven't yet

mostly out of principle

McClure:  We see your Corey Perry's vagina and raise you one tucked wiener from Rick Nash

Hey Kills, can you believe these guys are gonna have 7 d-men?

Hack:  To deal with the brightness of the aforementioned Henrik bling, we'll take the tinted visor of an Anze Kopitar

Hey Briere can play wing, so we take Ratatouille

Killion:  a fine hockey player.. and probably a fine cheese as well

Sam:  The only way this could have been worse is we had all met up and video taped this

Hack:  with extra shots of my head

just so people know what's up

Sam:  I genuinely feel for anyone who's made it this far, this is worse than a Simmons chat.

NO ONE DENIES THIS!

Killion:  are there just a glut of right wingers still available?

McClure:  But not as bad as a Puck Daddy chat, mostly due to Justin Bourne's involvement

Hack:  I'm finding it very enjoyable, except for a certain team not following the rules

Sam:  There are no rules!  This is SPART....I mean Second City Hockey!

Forget it Marge, it's SCH

My computer shows its 2 degrees

that's not even real

Hack:  why is your computer outside?

McClure:  With our next selection, we take Phil Kessel, who's one nutty guy in the locker room I hear

McClure will be here all da veek

McClure:  The jokes are thinning out with the draft pool

Sam:  We got Kaner and Price so you know we got all the blow and ho's too, bizznitches!

McClure:  And so marks the longest Kaner's ever lasted, even when whacked out of his skull on Busch Lights and Jager Bombs

He has to make these jokes.  He's had two, count 'em two, endurance jokes tonight.

Hack:  so many choices

Sam:  And we take Elias

Sam:  Have you done Alex Brown yet?

McClure:  And we're stuck with Buff. The indignities never cease.

Hack:  Which Dman will you be double shifting

Killion:  we're going to make Price skate as a d-man for the period he's not playing goal

Sam:  and then we take on the Mini ditkas

McClure:  No, this has gone on long enough

Killion:  well.. it's been a pleasure gentlemen

Hack:  so we're not setting our lines

They're going to change every period anyway

So as you can see, it was quite the special event. Our rosters are below, and I'm still playing this game under protest due to those cheating turds. 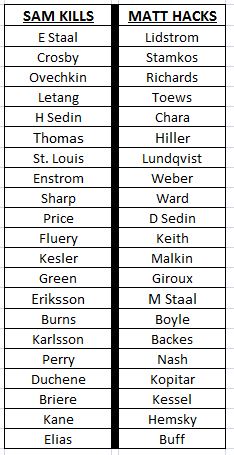