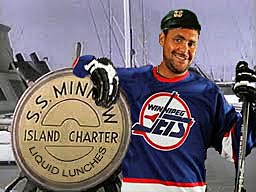 Guess who just got back today? Them wild-eyed boys who had been away...

Laddie and the Jets limp into the United Center after a rough home opener. Ladd was a -1 wallflower in the 5-1 loss, and Buff was on the ice for two goals against and in the box for another. It's unclear if Buff knows he's been moved to defense. He was caught behind the play several times against the Habs, and what's worse, left Oduya to defend the homefront whilst he was on holiday.

Offensively, with few exceptions, Winnipeg is a team awash in a sea of Jack Skilles. Pavelec is serviceable in net, but the blueline allows teams to Build-a-Bear in the defensive zone. They finished 20th in scoring last season and next to last in team defense. Hot-ninnipeg was fair with the man advantage(12th), but the penalty kill (27th) was what Brad Pitt saw in the box at the end of Se7en.

One might see the Hawks' strengths matching up nicely with the Jets' weaknesses and expect these numbers to add up to Xanadu.  Well, if past is prologue, not so much. The Hawks merely survived the past two meetings, winning 5-4 in a double-dutch/rochambeau/drawing straws contest in both games.

Should the game be decided by a coin flip again tonight, put your faith in the Captain. Toews not only racked up four points (2-2-4) in the game against the Thrash last season but also was automatic for the people in both shootouts, including a "game-winner."