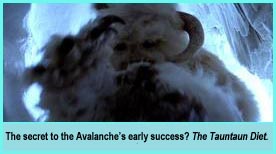 The Avs began the season at home with a 3-0 Scumwash, but since then, Bumble the Abominable Snow Monster has run and gunned its way to five straight wins on the road, including a hard-fought win against the defending champs and a 7-1 spanking of Ottawa.

And by run, I mean run. The Avs have young legs that could skate the river with Stevie Weeks. Colorado doesn't seem to be as quick returning to the defensive zone as they are leaving  it, however; Varlamov sees more shots than Cancun serves during Spring Break.

Unlike the teams the Avs swept on the road trip, the Hawks have the speed and skill to match them rush for rush, so we might be in for a little shinny tonight. The Hawks must keep moving their feet, control the tempo, and stay out of the box against the league's best power-play to avoid dropping four of the last five games to the Wampas.