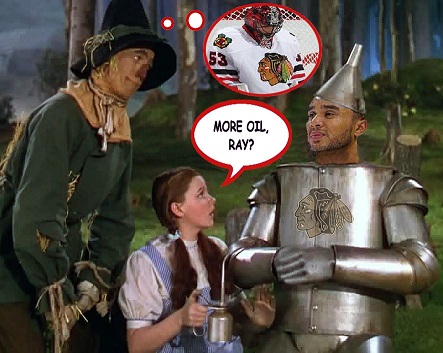 Perhaps communication breakdown is to blame.

It is a truth universally acknowledged that when Quenneville says someone played "ok," he actually means "awful."

Emery failed the eye test—and just about every other sensory metric, including umami—as well. Granted, Emery’s battle with avascular necrosis is heroic. He has a fighting spirit worthy of the legends airbrushed on his mask; however, Emery lacked focus in the exhibitions, slumped from post to post, and sent too many pucks back into the slot with bows on them. Salak looked quicker, sharper, better.

Much has been made of Salak’s inexperience, but he’s punched a clock in the minors, and during his years in the Finnish Elite League, learned the ways of the Force under Urpo Ylonen, the Yoda of European goalie coaches. Emery’s superior mileage also isn’t that strong of a selling point when one considers he needs a pit crew of spa techs to work on him for an hour just to shemp for Crawford on an off night or "maintenance" day.

Besides, at 26, isn’t Crawford the goalie of today and tomorrow? Salak is 24, so what is he being developed for exactly? Rookie goaltenders have a tendency to fight for the starting job around here. Veteran goalies generally end up being paid to play somewhere else. A popular theory suggests competition makes everyone, and everything, better.

I sense thousands of shoulders shrugging in digital. Of course, we’re only talking about 20 games or fewer here. Good enough may be good enough unless every point lost to a bad rebound or uncovered post becomes invaluable later. Like that ever happens in today’s NHL, right?