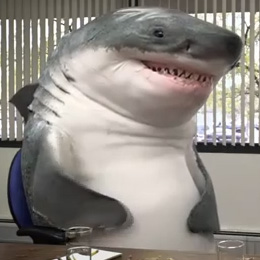 TV/RADIO: WGN / WGN Radio
Go West, young man: Fear the Fin, Battle of California
The Sharks enter the UC tonight fresh off a shutout loss to Brian-Elliot-backstopped St. Louis Blues. Somehow, the Sharks and Blues managed just 39 total shots in an 11 penalty affair, and one St. Louis powerplay tally got the job done. Including last night's loss, the Sharks have lost 5 of their last seven, and it could easily be 6 of their last 8 if the Hawks had found a way to solve Antti Niemi on Blackout Wednesday.
San Jose is a team that puts a lot of pucks on net (34.1 S/game), but doesn't get them through with the degree of regularity that they'd like (2.69 G/game). Going into last night's contest in the land of jean shorts, the Sharks were the worst penalty killing team in the league, and when coupling that with the occasional inability to score (4 shutout losses on the season), they don't always perform to their talent level. Speaking of not performing to a certain talent level, Marty Havlat is not having the start that many envisioned he would upon being traded from Minnesota. Our old boy JHC has managed just 1 goal and 11 assists in 21 games with his new squad.
On the back end, the pairing of Brent Burns and M.E. Vlasic are enjoying a fantastic start to the season. With a combined +23 rating and +45.2 in CORSI, Burns and Vlasic have been one of the most effective D pairings in the league thus far. Unlike Burns-Vlasic, Dan Boyle and Swedish cave troll Douglas Murray (who might be out for tonight's game) have struggled at times. I've yet to hear whether the Sharks will go with Niemi on the 2nd night of their back-to-back set, or if Thomas Greiss will get the start in net. Both goaltenders have sub 2.5 GAAs and save percentages north of 0.915, so the Hawks will have their work cut out for them, regardless of McLellan's decision.
The Men of Four Feathers enter tonight's game a well rested bunch, having played just two games in the last seven days. Rest or not, this figures to be a tough game for our Hawks. The Sharks always seem to play the Hawks tight at the UC, and the boys from the Bay Area will be looking to avenge last night's loss. Q is riding the hot hand by naming Ray Emery the starter for tonight's tilt. I'm not sure if the fact that Emery is appearing in his fourth straight game for the Hawks is a good thing or not. Considering that nugget, the Hawks would be wise to bring their defensive A game and limit the number of shots heading Razor's way.
A key for the Hawks (and for the Bears for that matter) will be winning the special teams battle. San Jose isn't great of the man advantage, but they have plenty of skilled top 6 forwards that can hurt you if you make mistakes on the PK. Beyond special teams, the Hawks will need another solid game from the Hammer-Leddy paring, who will skate against their fair share of offensive talent. On the forward side of things, it'd be great to see Marcus Kruger break through and have a multiple point night with Hoss and Sharp staying hot.
I'm not entirely sure how the Sharks' lines looked last night, considering there was probably some line juggling going on later in the game, but according to FTF, this is how things were looking heading into the St. Louis game:

Now, I'm not sure why McLellan hates Jumbo Joe these days, but this configuration does attempt to spread out the Sharks scoring depth. It's times like these when you're pretty damn happy to have three Hawks centers with a plus in the defensive acumen category. The Sha-arks as a whole can be a bitch at the dot, so winger support on the draws could be big for the Hawks. In terms of games in which the Hawks take at least one point, 5 is better than 4. Let's go Hawks!