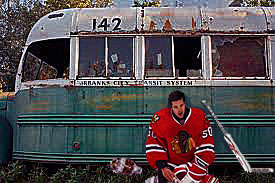 When the Hawks hike into the wild tomorrow night to clash with Western Conference-leading Minnesota, a national audience (Versus) will be treated to a juxtaposition of playing styles. The Wild play an aggressive but disciplined system that could suck the oxygen out of a forest fire, and the Hawks are fluid neutral zone counter-punchers who can bathe an opposing goalie's back in red in the blink of an eye.

In victory---and they've racked up seven straight---the Wild are Bizarro-Hawks. They win with an anemic offense, consistent, lights-out goaltending, and tireless effort and commitment to rookie coach Mike Yeo's defensive strategies. Minnesota averages 2.5 goals per game as well as the fewest shots per game in the league. Despite ranking 29th in shots allowed (32--and this without counting blocked shots, a stat in which the Wild are also tops in the league), starting goalie Niklas Backstrom earned a 2.08 GAA and a .932 save percentage before he was injured. Josh Harding put up a 2.14 GAA and .932 in relief, and after he got hurt, Matt Hackett (nephew of former Hawk Jeff Hackett), the backup of the backup, stepped up and let in only two goals in as many games with a larcenous save percentage of .974.

SCH has been a fun number-crunching convention as of late, and all I can say is that the probability of Sharp, Hossa, Toews, and Kane getting that many good looks at the net makes my calculator smile. Sooner or later the check comes for teams like the Wild, and wouldn't tomorrow night be a good time for that bill of misfortune?

One more thing: I wouldn't make too much noise if Razor got the nod again Wednesday (respect the streak, meat), but if Crow's still the man, I think Q shouldn't let Crawford get too comfortable singing Eric Carmen songs on the bench. The game against the Wild is being framed as a measuring stick, so find out whatcha working with, coach.