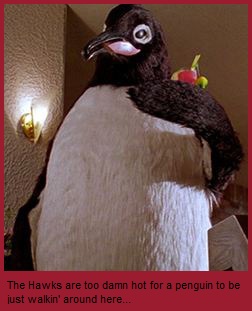 Before the links, please to enjoy these sparring shots from the southpaw. You are welcome to scroll past my drivel and go directly to the links, but I recommend you hug your elbows to your sides if you do. Never turn your back on a lefty.

Yesterday Shanahan dropped his banhammer on Bourque for his gutless hit on Seabs. Two games. Considering that Bourque has no priors, it's difficult to bemoan this sentence. It's sensible, yet I can't help but feel this judgment is less than satisfying. A dark, vindictive voice within me demanded that Bourque be forced to wear a stop sign sticker on the inside of his visor for the rest of the year. You know, like the patch they put on the back of kids' sweaters in youth hockey? That's the only additional punishment the voice mentioned that did not involve the Pit of Despair...or power tools. Perhaps it might be time to see the doc about that dosage.

Reviews of Morin's season debut with DDN have been lukewarm due to the fact that his stat sheet looked like a new car's odometer. He may not have dented the boxscore, but he did put a few dings on the opposing team on the forecheck. Morin also made some nice passes and showed decent awareness and positioning in all three zones. A citizen of Daydream Nation has to earn his space because DDN does not play a north-south game. When Kane and Toews do their thing in the offensive zone, the compass becomes a roulette wheel, and Morin just needs time to adjust to the speed and read the contrails. I'm not one for guarantees, but I'd wager that he brings you all out of your seats before we meet here again Thursday morning---if Q doesn't have him digging holes on the bottom six before then, that is.

Shanahan's vid on Bourque's suspension (Say Shanny, how does one determine the extent of a head injury?)

Jahns writes that Seabs is making the trip to Pittsburgh. Carcillo will not. Hawks fear Carcillo may have a brain injury...but how can they tell? (I keed; I keed.)

The Pens continue to work triage, but are still finding ways to win (Kuc)

The Trib's David Haugh thinks Emery has been a "nice catch"

CSN Chicago's Chris Boden appreciates that Razor has helped stop the bleeding, but reminds us the starting job is still Crow's to lose

Smokey marks it 8 for the Hawks (Madhouse Enforcer)

Down Goes Brown wants to play Let's Make a Deal