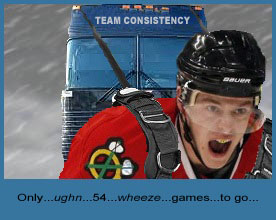 Oh, those wily Coyotes. Their desert voodoo worked its dark magic on Montador's skates and Crawford's depth perception the first twenty minutes and change of the game, but Tazer broke out his Gandalf staff and the Hawks stormed back to force the game into extra time. A round of backgammon and Razor's best pose for Madame Tussauds later, and the Coyotes limp out of the UC with the extra point.
No matter. Perhaps as valuable as the point in the standings is the fact that the Hawks didn't fold after going down 3-0. It would have been easy to do. It has been too easy to do. There's even a rumor that a certain lefty might have flipped to see what was going on at Gold and Silver Pawn after the Coyote's third goal.

But down a tres, the Hawks found their feet and a way to steal a spare. Mark it, Dude.