Awake In A Grave You Dug Yourself - Hawks 2, Pens 2 (Hawks win Bocce Ball)

Share All sharing options for: Awake In A Grave You Dug Yourself - Hawks 2, Pens 2 (Hawks win Bocce Ball)

I refuse to give the Hawks too much credit for needing to go to a shootout against what's basically an ECHL team at this point, but the fact of the matter is that things are so dire that points can't really be argued with at all now.  Given that this was an inter-conference game, that it became a three point game is immaterial to the goings on out west, but Calgary trapping Montreal under ice certainly didn't help matters.

The Hawks came out firing in the first- again, not difficult to do against a team missing two of the best 5 players in the world. That Sidney Crosby is still 3rd in goals and 5th in points after missing over a month shows just how much he was running away with the scoring race when his gray matter got liquefied. Patrick Sharp notched his 31st culminating a very nice passing play from Toews and Niklas Hjalmarsson, but the Hawks couldn't build on it, though Sharp's double minor high sticking call against Brooks Orpik didn't help matters.

The longer the Hawks went without opening things up on the scoreboard even though the shot totals mounted, the more it felt like Pittsburgh was going to get back into things, and indeed that's what the case was during a clown shoes power play where turd burglar (he burgles all the turds) Matt Cooke took a feed from Max Talbot and drew the Pens even.

Bryan Bickell was once again allowed about six full beats to get his shot off and was able to pick his corner from the right wall on one that Marc-Andre Fleury would like to have back. And once again, the Hawks were unable to protect a 3rd period lead, allowing long time Chicago Wolf Brett Sterling to cash in on a rebound that Corey Crawford left laying in the crease after Tyler Kennedy walked around and dropped his shoulder on ersatz Norris winner Duncan Keith.

A late power play was nullified by Matt Cooke taking a dive on a Hossa back check, and we got to see rare 3 on 3 hockey in the extra frame. The Hawks had their chances, outshooting the Pens 3-0 before the slap fight began. Corey Crawford stood tall and got some help from the post on Pascal Dupuis, and Slim Shady notched the only necessary goal. Hawks win 3-2. 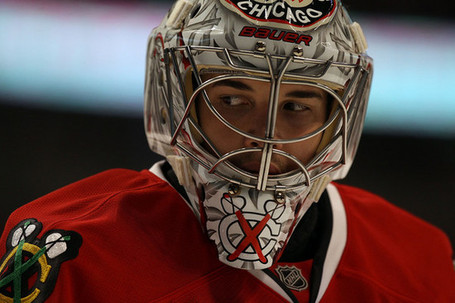 Not allowing anything behind him in the shoot out was a very nice change of pace from the last few times the Hawks found themselves in similar situations, even if Crow needed some help from the pipe. Overall it was a nice performance, especially during a flurry in the second.