You just might find, you get what you need: Hawks 5 - Leafs 3

Well the Men of Four Feathers made my first wrap a little harder than it needed to be, but I'll just have to suck it up.  The game tonight started off well enough as Marian Hossa took advantage of a close non-icing call and a gracious Welcome-to-Canada-turnover from Carl Gunnarsson, and went double 5 hole on Schenn and Reimer to open the scoring 70 seconds in.  About three minutes later, Phil Kessel (In what I'm certain was his first selfish turnover of the season) tried to stick handle through several hawks before losing the handle on the puck, resulting in a Brouwer-Frolik 2 on 1 that Fro slipped under the glove of Reimer.

After a big penalty kill that followed an unsuccessful 5 on 3 powerplay, Q sent Hossa out with Daydream nation to try and seize momentum back with a quick strike.  In what seems like a once per game occurrence these days, Daydream nation (with a nice entry pass from Hoss) executed a highlight reel rush as Kane hit a streaking Toews for a beautiful backdoor goal.  And just like that, the Hawks walked into the Air Canada Centre, and after 20 minutes of play, put the roadies on notice that DLR might be making a post-game appearance.  Unfortunately, Nick Leddy is far too young to appreciate 80's rock as he telegraphed a D to D pass that Joffrey Lupul intercepted and buried top shelf.  The Hawks would get that goal back later in period, thanks to great forechecking from Stalberg and Ryan Johnson and a where-the-fuck-did-that-come-from roof job by TomoKop.  The Hawks finished the 2nd period strong as Bickell cleaned up Bolland's...ahem, "sloppy seconds" on yet another 2 on 1 rush.

Things got a little interesting in the third when Jake Dowell's bad pass and/or failed clearing attempt was thrown back on net and redirected in by Joey Crabb.  In a fit of sleep walking that would make Brennan Huff and Dale Doback proud, the Hawks made the last 20 minutes of Corey Crawford's 11th straight start as difficult as possible.  Crow was up to the challenge as he snuffed out numerous quality scoring chances, including an excellent bid from Mikhail Grabovski on a penalty shot.  Luke Schenn made sure to take a little more luster off of the win by capitalizing on a Seabrook turnover in the final minute.  That's the anticlimactic way it all went down, let's get to the bullets. 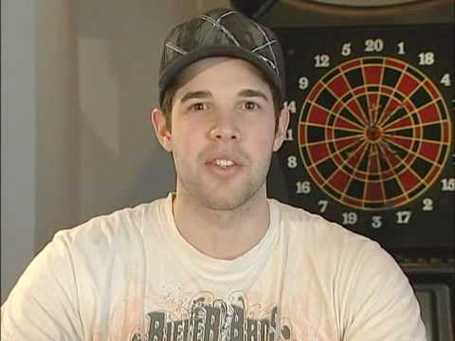 Aside from not being aggressive enough on Lupul's goal, Crow was money.  Blowing a 5-1 lead might have undone all of the good that this 8 game winning streak has brought to the team, but Crow made sure that didn't happen.