Share All sharing options for: Beard Of The Day - 4/13 - Chris Wollard 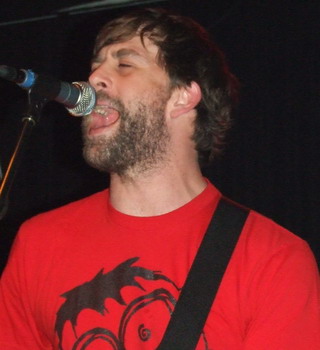 Our first game day brings us to familiar territory- rock musicians. Chris Wollard has been the co-vocalist and guitarist for the Gainesville, FL post-hardcore outfit Hot Water Music for nearly 20 years, as well as other side projects such as Rumbleseat, Chris Wollard & The Ship Thieves, and The Draft, which was 3/4ths of Hot Water Music after former BOTD Chuck Ragan temporarily left the band to raise his family and pursue solo interests. While The Draft never matched the sustained excellence of Hot Water Music with its one full length and 2 EP's, it was certainly solid in its own right, much like comparing the 2011 Hawks to last year's squad. And it's with that in mind staring down the President's Trophy winning Canucks tonight in Game 1 that we give you a fittingly titled cut from The Draft, featuring Wollard's gruff vocals to match his rugged, bearded appearance.

The Draft - Longshot (via enoezahp)