Maybe the title is a little strong, but that's what it feels like tonight. Because as we all suspected and feared, the Vancouver Canucks came tonight to end this, and played the exact game they wanted to. The Hawks were bottled up in the neutral zone, couldn't gather their blue line, had to dump it in and when they did that the Nucks made it look far too easy to get out of their. They were disciplined (for the most part), controlled, and smart.They took the lead three times, and killed of a two-man disadvantage. They didn't get bothered with extra curriculars, they didn't run out of place to make hits that left them exposed.

And it didn't come off.

Sometimes in the playoffs, you lose a coin flip. And that's what happened tonight. Make no mistake, for a great majority of the 3rd period and OT the Canucks bossed this thing. They were the fresher, faster, more smooth unit. And the Hawks have some desperate defending, a will to win that's been missing all year finally showing up, taking off its coat, and asking where the booze is, and Corey Crawford to thank. Oh, and a couple posts here or there, but we were due those. And now it's all up for grabs.

-For the winner, I guess we're just going to have to settle for the fact that once or twice a game Marian Hossa is going to show moments of genius, and basically be Waldo for the rest of the game. Hossa was about as visible as the aforementioned bespectacled cartoon before overtime tonight. And then he stripped Daniel Sedin, fought off two checkers until he found Hammer. I guess one moment of inspiration is better than none?

-If the Hawks had gone out of this season on a Kevin Bieksa winning goal, I think I might have shot myself in the kneecap over and over.

-Speaking of which, though he's come in for his fair share of criticism since arriving, and he's not exactly as advertised, Michael Frolik can play on my hockey team. He's good in every zone, never stops coming even though he's been windshield goo for most of the series, and tonight displayed some marbles the size of melons on a penalty shot the Hawks simply had to have. He may not even be a Top 6 guy in the long run, but he can certainly find a home on the 3rd line at worst.

-It also pleases me that in the midst of "getting dis", Dan Hamhuis is kind of responsible for two of the goals. Ok, the first one was an odd bounce off the glass but he still panicked before getting Rock Bottomed by Fabulous Weapon, and the Hawks third he completely lost track of Frolik and then hauled him down. Enjoy that clown for the next few years, Nucks fans.

-John Scott has three shifts. Enough with this.

-So the game reports say that Toews won half his draws against Kesler tonight, but it sure didn't seem like that. Especially when Q started sending Sharp's line out there against Kesler.

-So where do you go here if you're Vancouver? If this were a normal team, you'd tell yourself that you played about as well as you can, and you lost in OT, and if you can replicate that effort Tuesday you'd probably win. But this isn't a normal opponent, is it? And now you've played the Schneider card, and his dadaist way of playing the puck probably cost you two goals. Now you turn to Borat, who you've pretty much outlined you have no faith in. And though he wasn't bad tonight, and the Canucks seemed to really around him, he still gave up the winner. And now you return to a completely panicking media and support, having to play Luongo. And you've lost three straight, and stand on the precipice on simply the biggest shank of a series the sport has ever known. This isn't Philly over Boston, as the B's were a #6 seed who lost their top center during the series in David Krejci. This is the President's Trophy winner. Good luck.

-As for the Hawks, our rallying cry when Bass-ackwards Sunday came to an end was "Earn this". To me, they already have. They stood up and were counted when all the chips were down, and a battered, fatigued, and flawed team has taken the league's best to the brink. They've proven they belong here, because I'll be fucked sideways if the Dallas Stars could have done this. They have proven why they wear the belt and why someone has to tear it out of our hands. Moreover, they've provided us with one indelible memory to this season that had threatened to pass without any.

But is that enough? Fuck no it isn't now.

You've gotten to hear, you have to close it out. There may be only fumes of fumes left in the tank, but it's right there for you. The Hawks survived the best right hook Vancouver has tonight, and it's far from certain they can produce another one. Tuesday night, the Hawks have the chance to pull a once-in-a-lifetime comeback, and to etch four words on to the psyche of all Canucks fans:

"Forever In Our Shadow" 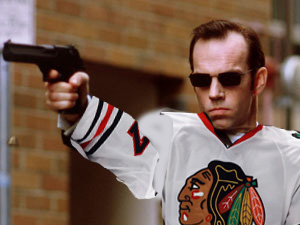 Agent Smith. Ok, the photoshop needs work but I'll get to it in the morning.