Share All sharing options for: Beard of the Day - 4/26 - Larry Herweg 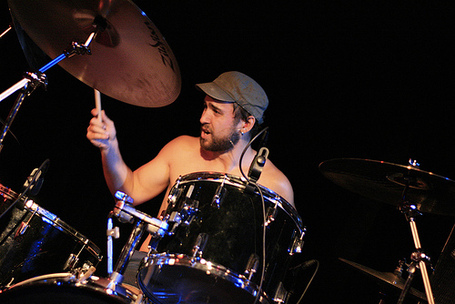 I know what you're asking yourself - "Who the fuck is Larry Herweg?" Well, hold on just a damn second wiseass, and I'll tell you. Long-time observers of SCH can speak to this blog's adoration of Chicago metal outfit Pelican, to the point of breaking out a reference at any opportunity last year when talking about David Haugh's favorite goalie. Larry Herweg is the man behind the kit for Pelican, providing a thunderous backbone to an already immense sounding wall of guitar, and sports an equally thunderous beard while doing so. And though Pelican is a purely instrumental act with no vocals to the point of only having a mic off to the far side of the stage for the sole purpose of thanking the crowd between songs, sometimes words aren't necessary for capturing the spirit of the thing, like a Game 7 against a most-hated rival for instance.