From Puck Daddy. Have a good weekend, y'all: 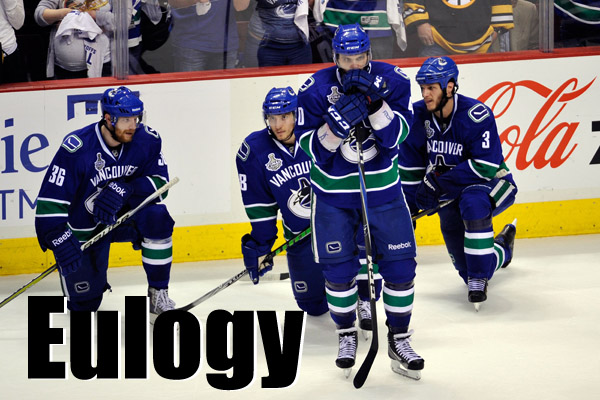 I think there was a part of all of us that wanted to see how much trash the Rogers Arena crowd could throw into the Cup from the top deck. Instead, Canucks fans, you saved it for Gary Bettman, which has to be the hardest target ever. Not only is it classless, but far too challenging. You work your way up to that, people. Maybe start with that latest car you set on fire.

Oh how they told us it would be different this year.  What was it you said after the Hawks were defeated? "They've slayed the dragon?" Well, it doesn't really help if you slay the dragon but the town is still destroyed. It helps less if you destroy the town yourself. 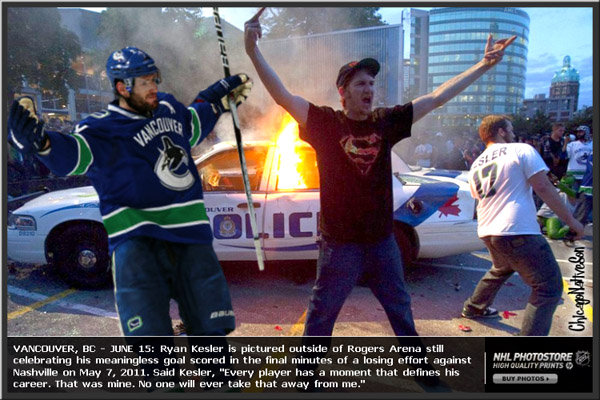 Ryan Kesler(notes) doing his "how do you like me now" celebration over a smoldering rubble just isn't the same.

But little did we know that barely escaping the first round against a beat-up and exhausted 8th-seed in OT wasn't the Prestige, but merely the Turn. As we all know, making what is known suddenly disappear isn't enough — you have to bring it back. Well, unless you're named Sedin. And thankfully, you did bring back the Canucks we all knew and…well, knew, just in time.

That's OK, maybe you can hang yet another meaningless banner that you seem to love so much to commemorate your 1st-round victory. Right there next to that one applauding yourselves. After all, you gave one to Markus Naslund(notes). What, was Gerald Diduck busy that day?

Hey, you there, lighting the car on fire. We know how you in B.C. like to medicate yourselves in times of stress, but you can't hotbox an entire province. Save that for your car or bathroom. Oh? What? Oh is that Canucks fans acting without any class? Sorry, I should have guessed. Anyway, let's move on.

Fear not Nucks fans, this can be a time of learning. You….what? I'm sorry, what did you say? "Learning"? It means to acquire knowledge for future use. You're not familiar with that? Well, stick with us here, you might be. I know, it's going to be rough, but I promise you'll get through it. And put that Malakhtov cocktail down, you still look like a wanker. 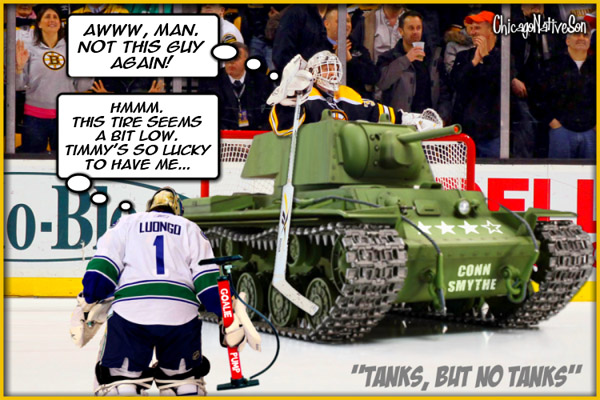 Right, first thing you can learn? Don't trumpet your offseason acquisitions as strokes of utter genius in July. That tends to turn people off.

Yes, Dan Hamhuis(notes) is a fine D-man. Chris Pronger(notes) he ain't. If he were, he wouldn't have been so ably replaced by one Cody Franson(notes) in Nashville, who then proceeded to go farther than they ever have. But it must be something in the water up there that turns players into lamentable characters. Even after Hamhuis waxed so lyrical about how frightened he was of what concussions meant long term, there he was trying to combine his elbow with Dave Bolland's(notes) cerebellum after he had just returned from the same affliction. Must be what you make legal over there.

Keith Ballard(notes)? Ah, he was going to really add to things too, wasn't he? And I'll bet he did. No one attacks the pressbox spread like Keith Ballard. Everyone knows this.

What else can you learn? Your midseason acquisitions won't redefine the sport either. Oh you Canadian media, you try so hard. It's kind of adorable. Picking up Maxim Lapierre(notes), you made it seem like Guy Carboneau was cloned and brought back to his younger years. And yet when the Ducks acquired him, it considered a case of Anaheim just wanting yet another piece of trash. Hmmm. Chris Higgins(notes)? The man with a picture in the post office in New York and Montreal? He was the difference? God, that is some really good stuff you have in the bong, isn't it?

But there's so much more you can glean from this year, Nucks fans. The biggest lesson is that there is something as using up all your "Hockey Magic" too soon. 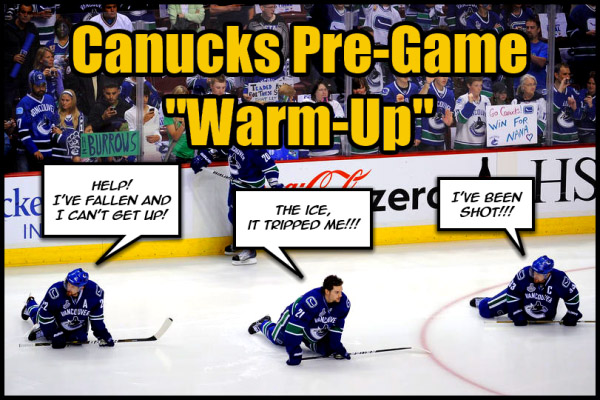 Every Cup winner has it. Those moments where you know it's destined to be yours. You have to spread them out. But you couldn't do that, could you? Blew your wad too excitedly? We've heard you have that problem. After all the dives, and non-calls against, and the goals that went in off someone's body, and the non-suspensions, there was a moment when you should have known the well went dry.

You were too busy celebrating, but you could hear it: It was when Alex Burrows scored in OT in Game 2 of the Final. Because he shouldn't have been on the ice, and you knew it. You ignored it, but you knew. And when he scored, you could here the savings account of karma or magic run dry. You were out. There was nothing left. And then the overage charges started when Aaron Rome(notes) hit Nathan Horton(notes) late enough to fit four Rene Rancourt fist-pumps in.

But there are other lessons to be learned. I know, you're getting dizzy now, but this could help. You can learn that your coach is an utter dunderhead.

Yes, he got you this far, but don't you think there's a reason that for the past three years your team has been wound so tight their collective colon is up around their eyeballs?

Your GM, slightly less of a dunderhead but far more of an air-raid siren, did his best to make this team Vigneault-proof. Almost pulled it off. While we're on the subject of Mike "I would have gotten away with it if it weren't for these meddling refs" Gillis, you can't really complain about officiating when you have Raffi Torres(notes), Lapierre, Burrows and Bieksa roaming around. That's truly a case of the pot calling the kettle a cheat and a cheap shot artist, and then punching him in the back of the head. The latter maneuver will be heretofore known as "The Canuck Handshake."

Hang on tight, we're almost done. All that caterwauling you did about Ryan Kesler's underperformance? Kesler was hurt you say? Then what does it say when he was the only Canuck during Game 7 who looked like he wasn't skating through birthsauce? And yet he could still only manage to fire it off the glass again. So excitable that one, must be contagious in B.C.

Which brings us to the Sedins. 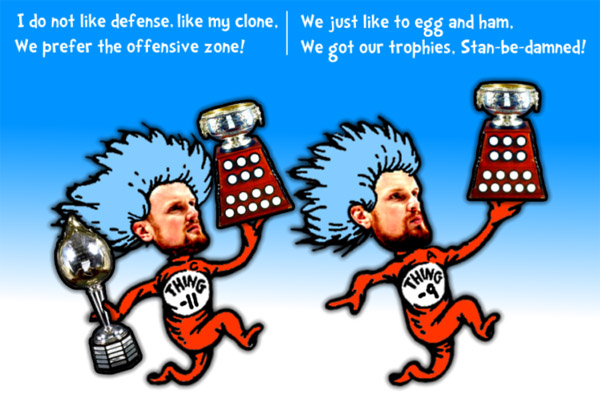 Have two players ever rung up a Hart Trophy and Hart Trophy nomination that are so hollow? They can have their own percussion section now, though they'd actually have to make contact with something to make that work.

But remember, if you absolutely need someone to dominate in the playoffs when you have a two-man advantage, the Sedins are….well, a candidate. Anything else, they can't help you. But hey, you're only paying them for three more seasons while they're on the wrong side of 30.

So where to now, Canucks? I imagine it involves overpaying Kevin Bieksa(notes) and watching him return to the yappy douchebag ways while he does the Dougie over to the penalty box repeatedly. It probably involves moving Christian Ehrhoff(notes) along while keeping Alex Edler, both of whom leave their feet on a check so much one wonders if Quinn The Eskimo just arrived. If he did, you'd only hurl debris at him anyway.

It probably involves a lot of wailing about if only Manny Malhotra(notes) had been around the whole playoffs, even though he was there the whole Final. Sharks fans can tell you with striking clarity what a difference he might have made. A healthy Hamhuis? Yes, assuredly one player could make up the minus-16 goal-difference you racked up in the Final. Except you'd have to pay that player $45 million a year plus virgins.

But what it should be is a realization that your best opportunity to bring the Cup home is gone, and isn't coming back. Both the Wings and Hawks have cap space to improve. The Sharks might finally figure out that tossing out the same 9 forwards every year and expecting different results is what lands people in rubber rooms. Maybe Dean Lombardi in LA grows a pair and brings in another premier forward (sit down, Penner!) to compliment the overworked Anze Kopitar(notes).

You'll still gather your points against what is a sitcom of a division, but elsewhere everyone is coming for you. 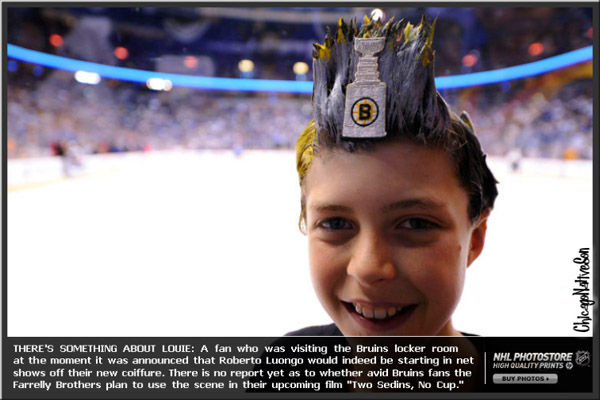 In the first draft of this, I surmised that you should be happy you lost. Because winning would have given you an identity, and that's not what you are. You're Western Canada's faceless team. No history, no tradition, you're basically the Pacific Time Zone Senators.

Your other neighbors there in the West have Cups and Hall of Famers and classic uniforms. You? You have a statue of a guy bitching about the refs immortalized. Oh, and Trevor Linden got a gate named after him. All your so-called rituals are stolen. Your Green Men? Taken from "It's Always Sunny." Your towels? Preceded in Pittsburgh by a decade. Your PA announcer's "Woo!" after goal announcements? Taken from your most recent conquerors. Your colors? Whaler-colors. Your original logo is the most perfect, non-descript in every way, giving no indication as to what you are or what you do.

And based on the damage around the city, apparently you've decided to adapt the Montreal method for dealing with loss. You couldn't even be original in your pathetic-ness. Maybe the problem is hitting the ice to U2. Are all your fans single women over 30? Apt that it's "Where The Streets Have No Name". They don't now, you burned all the signs.

But in the clear of the morning, I and all of us have come to realize that these playoffs did give you an identity. You are clearly marked out as a classless organization and fanbase, and a gutless team. That will go down in history.

Think about what you've accomplished. You couldn't rally the country of Canada around you in the least, and they'd get behind 13 hobos and a sloth if they thought it might bring back the Cup across the border for the first time since 1993. 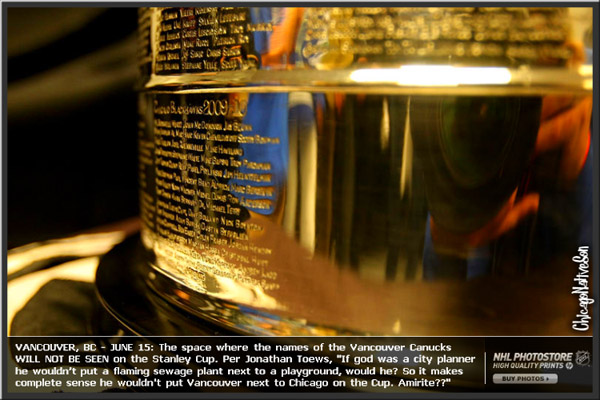 Moreover, you turned a giant swath of people into rooting for a Boston team. You know how hard that is? Most outside New England consider Boston sports to be the athletic world's shingles. Singularly unpleasant. And we all became fervent fans of theirs these past two weeks. Brad Marchand(notes) is a human nut-punch, and yet we were all leaping through the air like he was when he scored (no, not leaping like that, Alex and Christian).

I doubt there's been a team and fans that the rest of the hockey world took such glee in watching them fail. Now you can stop wondering why everyone hates you, like the kid in high school who ratted out the biggest party of the year to the faculty and wonders why he isn't a hero. You can stop invading our blogs to look for love, like your goalie who needed it from the opposing stopper.

(Hey Roberto, allow me to borrow a line from Tallahassee to chide you for your wanted affirmation from Timbo. Didn't you ever read "He's just not that into you"? You can't make yourself too available.)

Laughter, laughter. All you will ever hear or see is laughter.

Laughter, laughter. Laughing at all your cries! 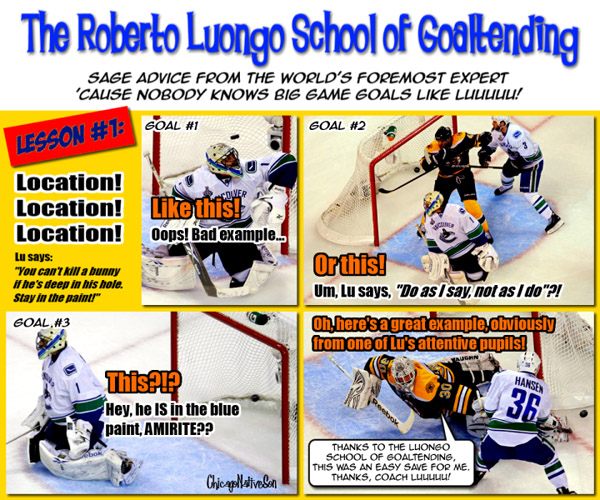 This Eulogy was written by Sam Fels of Second City Hockey. Images by John S. a.k.a. Chicago Native Son.