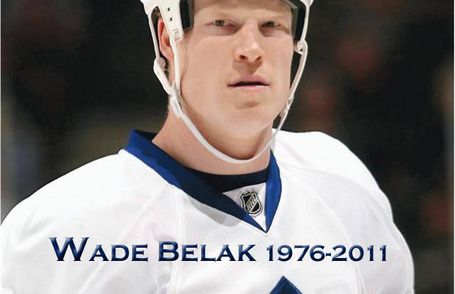 Wade Belak was found dead yesterday in his Toronto hotel room. In what is becoming an increasingly solemn off-season for the NHL, Belak's passing is the third NHL player to die suddenly in four months. Belak played in more than 500 NHL games for the Avalanche, Flames, Maple Leafs, Panthers and Predators. He scored 8 goals and 25 assists and amassed 1,263 penalty minutes. Belak retired from hockey this March, but remained in the Predators organization as part of its broadcast team. Belak was in Toronto to compete in the popular reality show "Battle of the Blades."

Belak is survived by a wife and two daughters. He was 35.