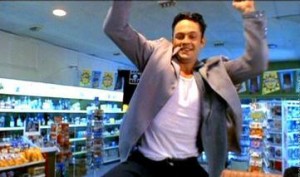 The Baby Hawks finished up the Toronto Rookie Tournament by making quick work of the Lil' Pens, 4-1. Mark McNeil, Byron Froese, Andrew Shaw, and Phillip Danault lit the lamp for the Hawks. Despite the fact the Hawks earned their only win yesterday in three contests, there is a lot to like about what the organization has incubating in the nursery.

Flick tenderized faces, Lavin and Olsen were steady on the blueline, and Saad's numbers impressed, but it was Danault's play that pushed my eyebrows into my hairline. The puck followed Danault around like a happy puppy, and what's more, he made something happen with it every time he was on the ice. A playmaking center with vision and touch? It's just a rookie tournament, but stay tuned.

Pause NHL 12 (or put down your copy of "The Help") and peruse these morning links. They're so money; they don't even know it.