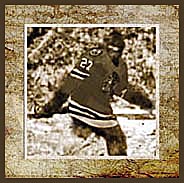 CHICAGO--Many sources have reported a Jeremy Morin sighting over the weekend. The elusive Morin was seen skating with the team Sunday and Monday, but confirmation is still pending from top prospectologists, who seek to identify him by making plaster molds of the power forward's skate ruts.

The fact that Morin is practicing with the team is call for much rejoicing. He has done little more in Hawk colors than tape a stick since January, when Andrey Zubarev flipped him like a coin and Morin came up "tails" (and down "heads" *wince*).

Concussion recovery ranges from a few days to...never. Morin is officially listed as day to day, but as far as I'm concerned, he can skate laps around the United Center, play three-bar with corporate confections, or film a prequel to "The Cutting Edge"--whatever it takes, as long as it takes--until he is ready to return with the same skill and snarl that made the 27 on his back mean something again.