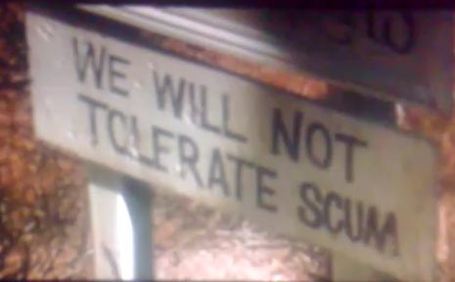 After only two preseason games against the Wings, bile is already cresting the back of my tongue.

Although the powerplay traded in its clown shoes for Gene Simmons' Dragon Boots and Kane was actually impressive at center (albeit mostly against Griffin flotsam), the main story of the 4-3 win was Brendan Smith's abhorrent and deliberate shoulder to Ben Smith's head.

After the game Quenneville stated both referees told him it was a "classic example" of an illegal head shot under Rule 48. Scum Coach Babcock, on the other hand, predictably blamed the victim. "What's the onus on the player with the puck?" Babcock bleated.

I'll say this for Scum: Their smug sense of entitlement is in midseason form.

One might suggest that the responsibility of the player with the puck is to score, and the "onus" of the defender is not to target the head of an opposing player, even if it's all that's left to hit after being dusted in the slot for the second time in the game.