Share All sharing options for: Not Quite Joe Perry's Bass Line: Jackets 2 - Hawks 5

It was Perry who played the bass for "Back In The Saddle", not that doofus Tom Hamilton. That was on Rocks, the last good Aerosmith album Make fun of me if you must. Anyway, it wasn't quite back in the saddle, but after a mini dip any win was pretty welcome. While we all wanted to get to post some jungle drums here, that will have to wait for another time. It's a win, and feels even better after Scum getting fed by The Isle tonight. So much for that panic about being in fifth now, eh?

-It's funny to me that Sarah Kustok and her determined illustration of penetrating journalism, as well as the gaggle in the dressing room postgame, asked Viktor Stalberg why he has so much success against the Jackets. It's not a fucking secret. Their defense is slow and awful, as well as not all that physical. That combination is going to leave Stalberg a lot of space to exploit. I don't mean to be harsh on Stals, because he played well and has for a while now. But there's a reason he lights up Columbus but not other teams.

-Even in my jaded state at age 30, there's still something awesome about being in the building when the hats come raining down from the seats.

-As I thought, and so did many of you, the lines from the get-go were pretty much Liar's Dice. Stalberg stuck with DDN, but after that? Bolland saw most of his time with Hossa and Hayes, which looks to be a straight up scoring line. After that it's was anyone's guess. Which is fine for tonight.

-All the goals came from non-front line scorers. That will do nicely.

-Tonight was a great example of why the instigator rule is a tale told my an idiot. While my stance on fighting wavers back and forth almost on a daily basis, the NHL can't have it both ways. It's either in or it's out. Jared Boll's first attempted decapitation came against Andrew Brunette where he looked like he came from my selling spot on Madison. Montador stood up for that, and saw 19 minutes in penalties. But the thing is, a jackass like Boll knows he can pull stunts like this and whoever comes in to defend the honor is going to draw at least 17 minutes in penalties. It's a trade he'll make every time. While his hit on Hammer looked cleaner, I won't get haughty about Jammer stepping in. But again, 17 minutes. If players like Boll know that this is what their ruckus will cause, they will keep doing it. Either you're outlawing the players policing themselves, or you're letting them do it fully. The NHL should decide.

-Hey look, the Hawks do know where the quiet room is. Maybe it's only used for the captain.

-While I spent most of the Indian in tonight's issue talking about trades that would solve the Hawks holes, none of them said anything about goalie. Because really the only answer is to fix Crawford. And the two goals tonight were a result of rebounds causing a goalmouth scramble that involve Crow looking for his contact lens, or so it feels. Sure, Leddy and Keith were out there for both, and it's so easy to blame them. But they were two rebounds and scrambles that didn't have to happen .

-Rick Nash had nine shots. Sometimes he does care. I'm sure he will more when he's a Leaf.

It's a win. Let's just be happy with that, and save the supreme performance for when they are truly needed. 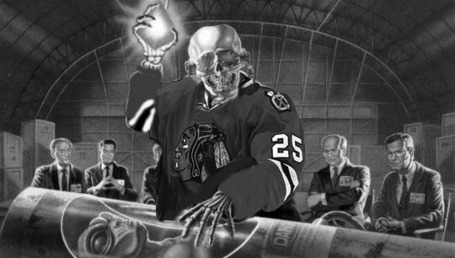