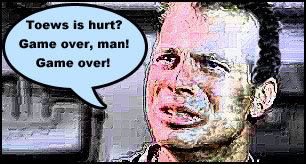 The Blackhawk calendar you got for attending the first home game may say it's Tuesday, but to the Hawks, it must feel like a Friday. Tonight's game against Nashville is the last one before the All-Star break, and with Shooter and the Captain out, facing a Preds team that play like it's 1999--literally and in the fashion of the Prince song--it may be a good idea to adjust our expectations.

Enjoy the festivities, all.

Blackhawks Convention tickets go on sale today at 11am

Rogers on how the Hawks will press on without the Captain

Crow will get the start tonight. Q still believes in him. How about you? (Sun-Times)

Oh, the irony. Is Campoli heading back to Chicago? (CSN Chicago)

Whether or not you agree ( I don't entirely) or disagree (I don't entirely) with the message, Hall of Famer Ken Dryden's ideas about how to address concussions are at least worth a look (SI.com)

THN's Ken Campbell admires Tim Thomas' right to abstain from the Cup ceremony at the White House; The Boston Globe's Kevin Paul Dupont less so. The juxtaposition of the articles is interesting: The former describes Thomas' decision as an act of bravery and the latter cites it as an act of cowardice. Personally? I can't wait to hear Thomas discuss which Federalist Paper covers how the Founders felt about no-touch icing (I keed, I keed). You all did very well to play nice in the threads yesterday. It's relevant hockey news, so I have to post it, but if the standing Palomino has cauterized the discussion, perhaps more the better. Either way, let's continue to disagree without being disagreeable.