If You Want to Destroy My Sweater, Pull This Thread as I Walk Away

As I said in my intro, this post is going to talk about advertising on jerseys in sports, how it relates to hockey, where I stand on this and where I think it's going. With the world looking like it’s going to end before the lockout does, hopefully this topic will distract you from the arguing children of the NHLPA and owners.

Share All sharing options for: If You Want to Destroy My Sweater, Pull This Thread as I Walk Away

It doesn't take an idiot to realize that advertising is a humongous part of sports revenue but it also doesn't take an idiot to see that it’s a pretty slippery slope. Just take one look at the jersey Michael Frolik is wearing right now in the Czech Republic and the problem should be apparent. Or you can look at just about any soccer team in the world. Most have a large front chest sponsor with the logo of their team much smaller above their heart. 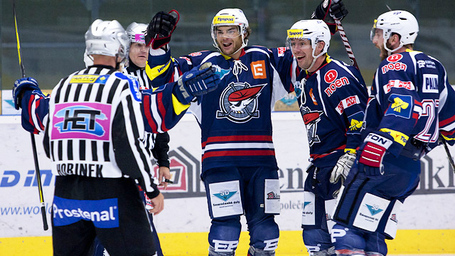 Maybe it’s because we lay claim to the best logo in sports, that I am so against the bastardization of it by smearing a Pepsi logo on the front. Maybe if we didn't have a long history of tradition with the Blackhawks sweater it wouldn't mean so much.

But jerseys to me are like personal badges of loyalty and dedication, something as sacred as one’s fandom shouldn't be humped into oblivion by corporations.

I also think the addition of the numbers to the helmet is a market test. Right now, sure it's just the player’s numbers, but does anyone really think the sticker on the top of the helmet helps officials and fans identify the player? If you couldn't determine who it was based on their name on the back of the jersey, large back numbers, numbers on both sleeves and their number already on the back of the helmet then maybe you need to see your local eye doctor. Those numbers are getting fans used to the idea of something taking up that space on the helmet and the league is gauging what the reaction is to it. Much like how the NHL used the PR firm to determine what words to use in their messages they are doing the same thing for exploring new revenue streams.

Which brings me to a point bmasson brought up in my intro post, with the increased revenue from advertising it should decrease the chances of another lockout if the owners and players make more money. The league is making more money now than it was in 04-05. There are now more revenue opportunities and I think if you look at old tape from that time you will notice less advertising throughout the stadium, which would lead you to think that the NHL would be under more pressure from sponsors to end the lockout now. But it obviously hasn't happened. It's just going to be another greed point between the players and owners over who gets what share of that revenue. If they are arguing when the league makes over 3 billion dollars what would lead me to believe that they won’t argue if they make over 4 billion?

But there are already advertisements on the jerseys, look at the Reebok patch. Not the same. Reebok manufactures the jerseys; they have a direct tie into the production, licensing and distribution of that product. An added advertiser doesn't have those same claims.

I can honestly say that if corporate ads start appearing on jerseys, I will not purchase one. Probably because I am already stocked up with my fair share but it’s also on principle. Expansion and growth aren't always good things. You have to look at the big picture, how it will affect your legacy and what are the long term ramifications of this decision. But who am I kidding; we’re talking about the NHL owners here who, needless to say, have a hard time viewing daylight with how far their heads are up their collective asses. So while I will hate the day that I see our Hawks skate out onto the ice with a BP logo across their chests, I don’t doubt that it is coming.