Let's get one thing out of the way real quick - these 11:30 am starts are total bullshit. The level of accomodation that NBC goes to for their precious east coast audiences is a bit absurd, exacerbated by the fact that the home TV audiences for both teams involved today were in the central time zone. And don't even get Fels started on the indignity of having to bring donuts for his sellers down at the UC- not that he doesn't enjoy rewarding their efforts, it's just that it shouldn't be necessary. Hockey games should start and end under the cover of night, because really, who wants to see hockey fans in natural sunlight anyway? It's not good.

Anyway, on to the actual action. With both teams coming off easy matinee wins yesterday, the scales were fairly even to start between the Hawks and Blues, but St. Louis controlled most of the action, despite the Hawks getting 4 minutes of power play time in the first. With the Hawks only mustering 4 shots in the first and the way the Blues play, Andy McDonald's late goal felt like an early death knell. But, that, as they say, is why the games are 60 minutes long.

The second period was about as boring as Ken Hitchcock could ever fantasize about, though the Hawks did start to gain a little bit of momentum and had a few shifts of sustained pressure, but nothing that ever made Brian Elliot exert himself.

And then the third period happened. Around 5 minutes in, the Blues blew an opportunity at a netmouth scramble, and the puck came back the other way, where both Patricks took turns stopping just inside the Blues' line to find a late man, and Patrick Sharp found Duncan Keith, who ripped a shot past Elliot cleanly. In a rare instance of actually learning from failures past, the Hawks didn't take their foot off the gas just happy to coast to a point, and played the majority of the next few shifts deep in the Blues' zone. An attempted centering feed from Dave Bolland to Patrick Kane bounced off of the better-than-Toews-because-he-fights David Backes and behind Elliot. A late Marian Hossa 3/4ths rink empty netter later, and the Hawks walked out into the sunlight victorious. Hawks 3, Blues 1. Sunday Bullets. 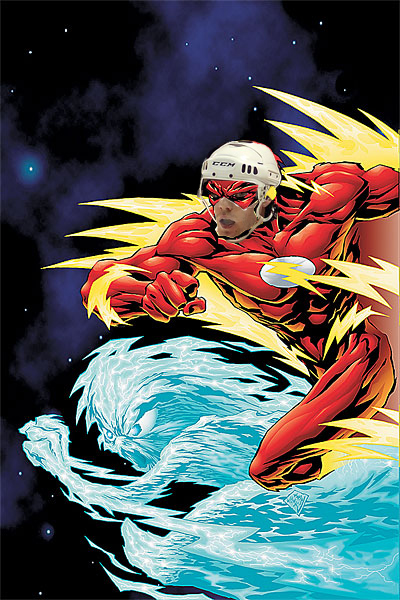 The Flash returns. One and one and a +3 while being all over the defensive zone all afternoon will land you here.