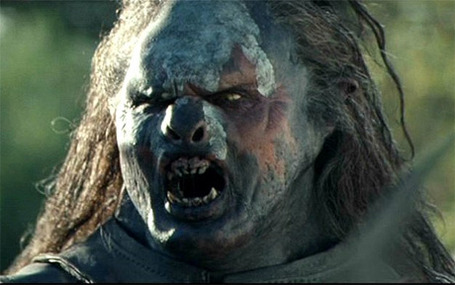 TV/RADIO: CSN for the locals, VS. for the outliers, WGN radio
BAILOUT CITY BASTION: Winging It In Motown
If you've come looking for McClure's usual pre-Detroit nerd out session, I'm sorry to disappoint. The pictures above are as much as you'll get, because I simply can't even come close to reproducing that bit of avant-garde genius, and hence am not even going to try.
Ok kids, you've survived a nine-game losing streak, and have spent the past three games starting to put things in place where they hadn't been in a long while. While still far from perfect, something of a foundation in the game the team needs to play is at least being built. You're far from a sturdy structure, but you're at least on the right track. But the thing can still wobble, and needs more solidifying.
So of course, here comes Detroit. Wonderful. Add to that Jonathan Toews will no play tonight due to a different upper-body injury than the one before, and you're probably starting to get a rumbling in the intestinal area. Let's not go into how scary this could be long-term, it's enough for tonight. On the other side, Pavel Datsyuk had minor knee surgery this morning and will miss a couple weeks. Oh to have the luxury of resting a star so he's completely healthy when it truly matters, no? Brendan Morrison will slot in on the top line, which I don't actually have a problem with as the second and third lines have been productive as is, and you don't need to blow everything up if you don't have to.

There is an argument to be made that, while the amount of skill and danger Detroit brings is always frightening, the style they do it with is actually exactly what the Hawks like to see. Because of Detroit's desire to carry the puck in with speed instead of a St. Louis or Nashville style of Angry Birds, the Hawks defense can do what it does best -- that's stand up at the blue line, deny entry, and then race the other way after the play is broken up. It's what's led to the Hawks and Wings playing three uber-tight games so far, and probably leads to another one tonight.
While I'm sure the following statement will lead to a lot of retorts of "standings!", here's the other thing that leads the Hawks to deal with Detroit well. The Wings defense just isn't all that quick. Sorry, it's not, and we have ample evidence of the Hawks continually beating them to the outside to prove it. Nicklas Lidstrom is still a very effective defenseman, and because he's still breathing he'll win another Norris thanks to the lazy fourth estate who don't really care to study the category. But he's not near what he was, and he can get exposed at times. Or maybe I hallucinated Toews making his head spin back in December. I know what Ian White's +/- is, and you can still fucking have him. Niklas "It's hard to practice with Pierre McGuire constantly sucking my cock" Kronwall's defensive game has improved from the rodeo cowboy he was earlier in the year, but he still can leave wide open spaces as he charges off for another hit or scoring opportunity. Jakub Kindl and Jonathan Ericsson? Well, there's a reason the Wings were reportedly in on lumbering turd Pavel Kubina, so there you go.
All that said, any team that can roll 23 straight at home is obviously more than just a nuisance. Even with Todd Bertuzzi's customary late season slinking into uselessnees, the top line with Datsyuk and Franzen is a real problem (though Mule Cock hasn't done much against the Hawks this year). While we joke about Zetterberg's diminished scoring totals meaning he should be traded for Ryan Miller, Jiri Hudler and Valterri Filppula aren't setting career highs in goals in spite of Z. Oh, and now they've got this checking line of the strangely old looking Drew Miller, Darren "when Pierre's done with Niklas it's my turn" Helm, and Justin Abdelkader. It's been hellacious, though Abdelkader may return to the fourth line with Dan Cleary coming back from injury.
And Jimmy Howard returns tonight. Wonderful.
For me, the most fascinating aspect is what Quenneville decides to do with his defensive pairings. Or it would have been had Dats not been injured, and Quenneville had not gotten into the glue again and decided that against the smoothest moving team around he's going to have a third pairing of Scott and O'Donnell. Scoff all you want about it just being a third pairing, but I guaran-fucking-tee that Babcock will find a way to make it matter at some point. Meanwhile, a perfectly serviceable d-man with actual feet in Sami Lepisto will sit idle.
A challenge to be sure, but get this one and it opens up a bit. A sinking Dallas squad follows, with the Southern Cali and then Ontario Double to follow. Win here, and suddenly the idea of immediately canceling out that losing streak doesn't seem so ridiculous.