With the midday news that both Jonathan Toews and Pavel Datsyuk would be missing tonight's contest, the general consensus seemed to be that the game tonight would end up being the equivalent of watching a couple of labrador retrievers wrestle around in their own filth for a chew toy. So much for that theory.

An early Marcus Kruger tripping call where he got caught reaching put the Hawks down a man on a rare brain fart from The Plan All Along. Naturally, the Wings made the Hawks pay as they always do, on a 40 foot shot from Valtteri Filppula that Crawford saw all the way, after numerous failed clearing attempts by the Hawks. However, rather than get down about it as they had during the 9-game Freak Out Hellbus Ride, the Hawks slowly and surely regained the momentum of the game, despite two clown shoes power plays, and Scum had a 1-0 lead after 20.

The second frame was far more wide open, with the Hawks getting several breakaway and odd man chances, the most glorious of which came to Michael Frolik, who didn't even hit the net. A shift of sustained pressure in Scum's zone was punctuated by Jimmy Hayes pouncing on a deflected loose puck in front of Jimmy Howard for the equalizer. There would be long stretches in the Hawk end of the ice as well, as Scum finished the frame with 16 shots in those 20 minutes, but were unable to solve Crawford again.

Early in the third, the Kruger/Hayes/Brunette line struck again, after Marcus Kruger potted the go-ahead strike off a Jimmy Hayes wrap around bid, with Andrew Brunette amid the pile of carcasses in the crease himself. Shockingly enough, it was actually a cruise on out for the Hawks, where they simply out lasted Scum and played most of the period in their end, hardly even allowing any semblance of a chance, all of which Crawford was ready for. Hawks 2, Scum 1, and we're not giving up bullets for Lent. 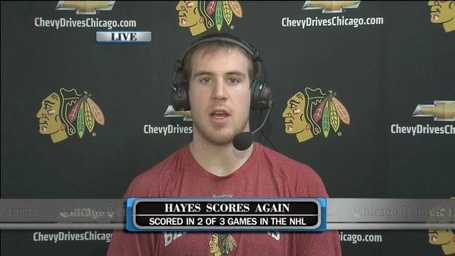 A few options here- Crow stood tall, Kane was everywhere, and Vik was a rabid cheetah on the forecheck, but it's gotta go to the guy who factored in on both goals.