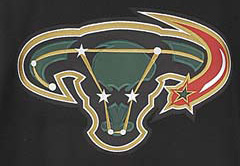 What's one way to get people to stop wondering about the concussions (sorry.. I mean "upper body injuries) to Steve Montador and Niklas Hjalmarsson? Tell them Jonathan Toews has one too. News came out yesterday that Toews will miss tonight's matchup against the Stars with a UBI of his own. Early reports are that Toews is "progressing" (towards what, we don't know) and he may even join the team for this weekend's California trip. Or he may at least start skating with the team again. Or not. We should rest assured in this team's medical staff though - it's not like they've ever mishandled a player's concussion before. Not to shit all over the Blackhawks and leave the captain out of it - if he was playing with a concussion then he made a very stupid decision, one that the team should be very angry with. We get it, you want to win at all costs. Be smarter... everyone.

The blue line could get one of their fallen back though as Hammer may rejoin the team today. Remember when Brent Seabrook kinda sucked then Wisniewski took his cheap shot and Biscuit came and looked completely recharged and played as good as he had all year? I wonder if that will work on Swedish imports or if that feature is only available on British Columbia models. The possible addition of Hammer is likely the only real change we'll see from the Hawks. A winning streak is just about the only thing that satisfys Q's desire to play the slots. Crawford is reaping the benefits of the team playing tighter D in front of him and also his own improved positioning and his consecutive starts will continue tonight.

The Stars come into tonight only two points out of a playoff picture but with an outlook on the season that isn't too bright. The Stars flew out of the gate to start the season going 11-3-0. They then had a 5 game losing streak but managed to even things out. While things stayed pretty even, they've slowly begun to decline and wear down as the season goes on. The losses are coming a lot more frequently now. They haven't won three games in a row since December 15th when they beat the Islanders. Now they haven't won two games in a row since taking a home and home from the Ducks to start February. They're coming off a 3-0 blanking of the Habs on Tuesday though so this is a streak they're looking to change.

With the trade deadline looming though - the Stars are in that precarious position of not knowing whether they're real buyers or sellers. From recent reports though - it seems they've accepted that the team needs more than just a piece or two and are willing to at least listen, if not trade, some names like Mike Ribeiro or Steve Ott. Both are fairly popular players in Texas so it would have to be a pretty big move for the Stars to move them. They also unloaded Nicklas Grossman to the Flyers for picks. Lets also take this moment to address something else that is sure to come up in the comments since Twitter was filthy with it last night. Adam Burish is definitely on the block. I understand many people's desire to see him back in the Indianhead on a sentimental level. He was easily a fan favorite, seems to be a good teammate and can occasionally do something great on the ice. That's looking at his career through the rosiest of glasses though. The Blackhawks have cap space but there are much bigger needs than an energy forward who is far more likely to run his mouth or take a undisciplined penalty than to score a point. I like Burish too.. but he's not the answer the Hawks need.

Kari Lehtonen has been solid for the Stars with a .920 Sv% but he'll be watching from the bench tonight as this is the first of a back-to-back for Dallas. The Hawks will be facing Richard Bachman who only has 14 games to his career in the NHL and hasn't won a game since Jan. 7th. The Stars are a decent road team with 14 wins and loses and despite their recent struggles they're 4-4-2 in their last ten. Playing .500 hockey isn't going to get the Stars into the playoffs though. The Hawks have been been playing solid the past 4 games and could extend the streak with a similar effort. Five is better than four.