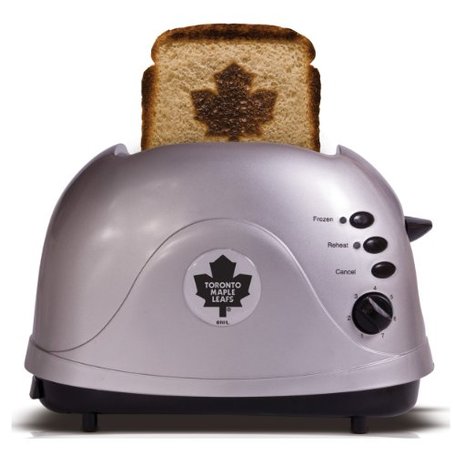 Things have been pretty shitty for us Blackhawks fans lately. The road trip from hell, the brief joy of winning four in a row against the best team in the NHL and two fierce rivals, and the ultimate letdown of losing the next 3 has left everyone a little exhausted and on the verge of giving up. (By the way, we need a nickname for the 9-game losing streak. We had the "March to the Sea" a few years back... what's the opposite? Napoleon's Russian Winter?) As bad as it may be for the Hawks and us fans, at least we're still in the playoff picture (however precariously).

However bad you may be feeling right now... Toronto fans probably feel worse. A month ago, the Leafs were in 6th place and were hoping to make the playoffs for the first time since the Drew Carey Show was still on the air. Then February hit. It started out well enough, they won the first three games of the month, including a DLRing of the Senators. Since that third victory though on Feb. 6th, they've won only a single game and collected only 3 points. They're 1-8-1 in their last ten games and things don't seem to be getting any easier. They've dropped from 6th place to 10th and sit 4 points behind the Capitals (yet another disappointing team) for the final playoff spot in the east. Leaf fans may have hoped a 4 game homestand would have helped end the month strong but instead they managed just a lone point in an OT loss to the Devils.

Who's to blame for the month? Well Puck Daddy already answered that question... or at least tried to. The simple answer being, the Leafs allow a lot of goals, 3rd most in the league behind Columbus and Tampa. Allowing a lot of goals can be OK if you at least score a lot too (AKA - The Chicago Blackhawks this year) but it's not working out for the Leafs. They are directly behind the Hawks in G/G though.. so beware.

In another story that seems eerily familiar - the Leafs have two goalies that are struggling mightily. Jonas Gustavsson and James Reimer have had incredibly disappointing seasons. Both goalies were brought in to the team with huge hopes. Gustavsson was supposed to be "The Monster" but he hasn't fully lived up to the potential yet. Reimer was brought in when Gustavsson proved to be a headcase with a magically exploding heart. His debut was solid and inspired possibly my favorite DGB/Bloge Salming parody.. but again, this year has been a let down. The situation in goal doesn't show many signs of improvement. Last night the Leafs took on the Panthers at the ACC and Reimer let in goals on the first two shots he faced, the first 13 seconds into the game. The play-by-play sheet literally reads "Faceoff, Giveaway, Goal". Ouch.

The Blackhawks are once again without Jonathan Toews for the fifth game in a row (also gone are Hammer and Monty). The picture isn't looking good as Q has been quoted as saying he's made "no progress" in the last few days. Also ouch. The Hawks will get their first look at two guys for the first time as the inexplicably Swedish Johnny Oduya will suit up, as well as Brandon Bollig, called up from the Rock. We've covered Oduya already and we're at least curious if not excited to see what he can bring to the team. He was paired up with Brent Seabrook in practice yesterday. Bollig's call up is a good sign for the winger though. Resident Ice Hogs expert Chris Block summed up his game nicely in this tweet. Bollig clearly is being brought up to provide some of that sandpaper and intimidation factor that Q loves so very much. At 6'2 and 223lbs he can hopefully deal with some of that truculence the Leafs bring.

I'm writing this too early to get word on lines or defensive pairings so I'm sure you'll fill that in for me in the comments. We do know that Corey Crawford is going back in the net after being pulled over the weekend (I stand by my point that it wasn't fully his fault though). Due to inactivity the Hawks have dropped to 7th in the West and points aren't going to come much easier than they will tonight. Despite having Phil Kessel still lighting the world on fire the Leafs should be an easy target. All too often the Hawks play down to their opponents though. Can't happen tonight. Oh.. and they're wearing the Whites at home.. beautiful.