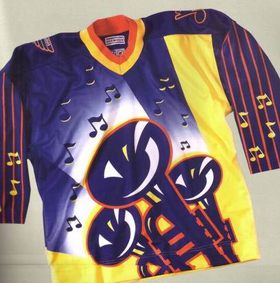 It seems like the easy joke for this calendar year is going to be justifying every odd, strange or bizarre occurrence with the Mayan calendar was correct in predicting" the end of the world in 2012. 70 degree sunny days in early March in Chicago? Mayans were right. Some lady from Jersey Shore gets knocked up? Mayans were right. We're going to avoid that joke here though. Just because the Blues are in the lead for the President's Trophy does NOT mean the end of the world as we know it. Is it fun to watch? Of course not. But it wasn't fun in the '99-00 season either last time around and I think we all know how that turned out. If you don't, just go ask any friends you have that may be Blues fans. (N.B. Make sure there are no sharp objects around and get ready to bob and weave as soon as you finish asking the question)

So once again, the team the Blackhawks skate against are likely the best team in the NHL. It seems the Hawks have had more than a few games against teams playing at their absolute best and on more than one occasion, the Hawks have risen to the challenge and come out with two points. Tonight is going to be no different. Despite getting that odd sickly feeling you get when you drink too much coffee when I write it, the Blues are probably the best team in the NHL. They've only lost 7 times since the calendar switched over to 2012 and only seem to be gaining steam as we quickly close out the regular season. They're 9-1-0 in the last 10 games and haven't allowed more than a single goal since March 1st. They've just started off a 7-game road trip with a bit of a stumble as they beat the Blue Jackets but made it look far more difficult than needed. And that may be the one positive the Hawks have to look at for tonight's match up. The Blues are a phenomenal home team with a silly 29-4-4 record in STL but a goodnotgreat 16-14-3 when they play on the road. The Blues also struggle in our fair city with a current 0-3-2 record and only 4 wins in their last 18 visits.

The rest of the story remains the same. The Blues are a fast and punishing team that hasn't yet found a chance to run an opposing player into the boards that they haven't liked. Their physical style obviously leads to their fair share of penalties as well but they're currently boasting one of the more impressive penalty killing squads in the NHL (practice makes perfect). They're 7th in the league in PIM/G at the moment but haven't allowed a power play goal in the last 47 attempts. This is bad news for a Blackhawks squad that once couldn't score in almost 47 chances of their own not too long ago.

While the constantly drooling Blues fans will tell you their success is because of their willingness to hit and fight, the truth lies in their solid defense and outrageously good goalies at the moment. They lead the league in SA/G and obviously aren't afraid of having their players lay out to block a shot. They've also got the problem of not knowing which goalie to start. While we've got one goalie who is about 7 layers of hell deep inside his own head and another whose hips could disintegrate at any moment, they've got two players who are in the top 10 in SV% for players with regular starts. Tonight it'll be Jaroslav Halak against Ray Emery. Halak is on an 8 game winning streak and hasn't allowed more than two goals in a game since February 9th (and the Blues won that game anyway).

So now if you aren't too bummed out yet - all hope is not lost. As mentioned, the Hawks have found success against this team in The Windy City and shouldn't be counted out by any means. They'll need a much better effort than we saw on Sunday and especially the last time these teams met. The Blues game is no secret, strong forecheck, suffocating defense, solid goalies. In order to beat that, the Hawks need to play ugly. That doesn't mean engaging the Blues after the whistle or running their players (though we're most certainly going to see Bollig drop them again.. and I wouldn't be surprised to see at least one other fighting major tonight). What it does mean is that the Hawks shouldn't even think about passes that are more than 10 feet away. Short quick passes will be key. The Blues aren't going to give up the home run pass the Hawks are constantly on the lookout for so don't even try it. The goals scored against the Kings were ugly results of players going hard to the net. That's probably the only way the Hawks are getting them tonight too.