It seems as though there's been a recurring theme since the 9-game Freak Out Hell Bus ride with this iteration of the Hawks. Start shitty, claw back, shorten the bench, bombard the opposition for the final frame, and hope to come away with at least a point. Tonight, they walked away with two huge ones, both points and rocks.

The script started at least a little differently this time. with the Hawks taking advantage of what was thought to be prior to tonight scarce space in the neutral zone, as Marian Hossa chipped a pass to a streaking (yes, you read that right) Andrew Brunette, who broke in alone on Jaroslav Halak and roofed it glove side to give the Hawks an early lead for a change. Never ones to deviate from a system, however cockamamie it might be (this team is still coached by Joel Quenneville), the Hawks quickly farted the lead away when Jamie Langenbrunner blew a 50 footer by Ray Emery that Razor should have had, and the Hjalmarsson should have cut off in the first place rather than giving us some Roger Dorn-caliber ole bullshit. A nifty passing play after a Hawk neutral zone turnover gave the Blues the lead on an Andy McDonald goal (who has been treating the Hawks as Viktor Stalberg treats the Jackets), and a Patrik Berglund redirection would give the Blues a two-goal lead, which is exactly what COULDN'T happen. The indignities didn't cease there, as the period ended in a fracas of dumbassitude which resulted in the Hawks being down a man going into the second, but more on that in a bit.

With Corey Crawford now on in relief of Ray Emery, who allowed 3 goals on 6 shots, the Hawks continued to press, and actually exhibit at least a little bit more patience than we're used to at the Blues' line, repeatedly chipping pucks deep and winning races against a for-the-most-part lead footed Blues d-corps. A fortunate bounce found its way to Viktor Stalberg's stick and/or leg from some hard work from Sharp and Kruger to get the puck there, and trickled past Halak and brought the Hawks within one. As sure as the tides and Cheerios going through me like a laser beam, the Blues started a steady march to the penalty box due to their inability to keep up with the Hawk forwards' speed as well as their general idiocy (see Sobotka, Vladimir), it was only a matter of if a clown shoes Hawk power play could finally make the Blues near record setting PK pay.

At long last midway through the third, Brent Seabrook blew one by the low glove side of Halak from the right point (again, take a note Duncs), with an unnecessarily jumping screen from Andrew Shaw in front. Though the Hawks would have several glorious chances in the remainder of the third and overtime, alas, things would get to the skills competition. Patrick Kane slid a backhander through Halak's five hole, and Corey Crawford made it stand up with three solid stops. Hawks 4, Blues 3, here's a ballbag full of bullets. 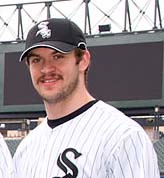 Lots of candidates tonight, but we'll give it to the man who vaguely resembles a young Mike Patton who had the game tying goal, who was also a clownish +18 in Corsi, tied for the team lead with his partner.