Not On My Watch - Hawks 3, Blues 3 (Hawks Win Scattegories)

Share All sharing options for: Not On My Watch - Hawks 3, Blues 3 (Hawks Win Scattegories)

Ordinarily, this is where I'd bitch and complain about the Hawks blowing a two goal lead in the third period and needing to go into extra innings in the skills competition to settle things, but given the circumstances of Toews and Keith being out, and pretty much needing points any way they can grab them, I can't be too sour on things.

Much the same as two weeks ago when the Blues were on West Madison, the Hawks were all over them from the word go, being quick to the outside and smart with their station to station passing. Long distance softies at both ends nine seconds apart in the first were the only scores through 40, though the Hawks held a distinct advantage in play, all without the benefit of Brandon Bollig needing to change the momentum for them.

The third period would see the Men of Four Feathers cash in twice in the first half of the frame, first off the tape of Andrew Brunette, who deposited a rebound in a goal mouth scramble after Marian Hossa drove to the net hard from the left wing. Four minutes later, Patrick Sharp would cap off a 2-on-0 with Viktor Stalberg to widen the gap to 2, but that would be short-lived as well. After corralling a failed ring around from Johnny Oduya, Jason Arnott got the Blues within a goal as he was allowed about three or four whacks at the puck from the side of the net, and eventually got it past Corey Crawford. And with a buck and a half left and the Blues pressing, David Perron would continue to do his best Martin Erat impersonation by evening things up in supremely annoying fashion, deflecting a Kris Russel point shot, and the game would need extra time. The 4-on-4 skate saw the Hawks get a whopping 7 shots in 5 minutes on Jaro Halak, but he would be unyeilding. Even the shootout would need extra time, as the first 6 shooters on either side were denied before Dave Bolland patiently waited out Halak on the forehand, and Corey Crawford and the iron made it stand up at the other end. Hawks 4, Blues 3. To the almost-but-not really quite playoff bound bullets: 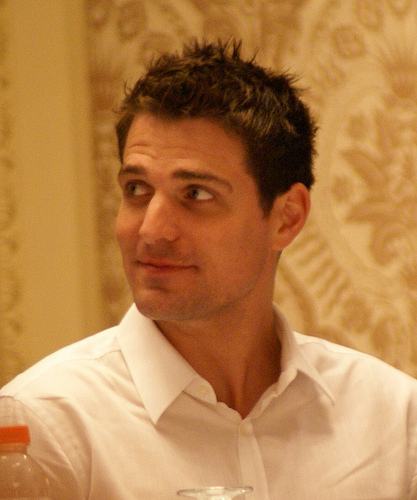 Sharp led all Hawks with 7 shots on goal, including one that capped off a 2-on-0 with Stalberg, with Vik wisely deferring to his more handsome linemate. When the Captain returns, Sharp and his linemates are making a strong case for being kept together over these last two games.