We Just Come From Such Different Sets Of Circumstance: SCH's Phoenix Coyotes Preview

Share All sharing options for: We Just Come From Such Different Sets Of Circumstance: SCH's Phoenix Coyotes Preview 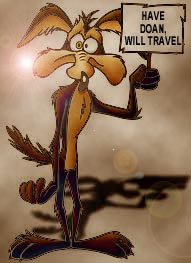 It's finally that time of year again. The air's a little fresher, your beer tastes just a little crisper, though you're probably drinking more of them than usual to deal with the upcoming stress. You're even more unproductive at work, but your boss hopefully understands why. You males have had your last shave and have put the razor towards the back of the medicine cabinet in the hopes that you won't be seeing each other again for many weeks. You'll spend the next two nights trying to distract yourself with baseball or the Bulls (make a fucking free throw, lads!), or better yet spending one last night with loved ones before your incoherent babbling and constant hangover turns them against you for the next little while. Best time of year, isn't it?

With that, it's time to start SCH's normal playoff preview. But let's start off with getting to know the particulars of the Phoenix Coyotes, as this will be the first time these two organizations have tangled in the playoffs. And that goes back to the Winnipeg days... 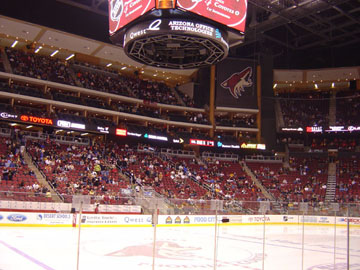 Well, won't this be rife for jokes? Using this pic is probably bit unfair, it won't look like this Thursday. However, if there's one break we can agree the Hawks did catch by failing to grab 5th is that they avoided some intimidating atmospheres, as San Jose, Nasvhille, and even Staples Center can be that. While the Coyotes fans will try hard with their whiteout, you can probably expect what we've seen the past two years. That is huge blotches of red in the sea of white that are the invading Hawks fans. Sadly, there will be a lot of noise during the Anthem at Jobing.com Arena, a tradition that traveling Hawks fans bring with them that we are at SCH frown upon. That's a Chicago thing. Here it's inspiring. In others' buildings it's bullshit posturing.

And that point total matches his age, almost. Whitney is as crafty as they come, and does have some sick hands. Didn't get much of a chance to put his playoff pedigree on display last year as the Yotes were gone quicker than a sneeze, but previous runs with Carolina have bagged their share of points, as well as defensive iffiness. Still, if Ray Whitney is leading your cavalry charge, it's hard to avoid the adjective "punchless".

I know, I still have a hard time believing it. But it is what it is. Still, perimeter scorer...playoff games...they don't really go together unless you're Patrick Sharp. At least Sharp puts his shift in along the boards. There also won't be any shootouts where he can fucking deke to his backhand which he does every fucking time yet no Hawk goalie has figured it out. 4 goals in 20 playoff games tell their own story, and unless he's going to freak the fuck off on the power play, I'm still expecting Vrbata to be a synonym for Casper when this series is over.

Yep, that's right, the Hawks somehow found a playoff opponent with a worse man-advantage than theirs. Hey Rocky, watch me pull a rabbit out of my hat! Anyway, you'd think with the creativity of Whitney, the shot of Yandle, and the net presence of Hanzal and Doan they could cobble something together better than this. And they don't have a complete short-bus running their power play, like some teams. But they don't. Though the Hawks' PK can make anyone look good, if there's a team they can keep quiet on the PP, this is it.

Probably their biggest advantage in this series, aside from the goalies. The Yotes kill wasn't anything special last year, but has seriously rebounded this year. Full of smart, quick forwards and a good goalie, it will take some beating. And looking at the combos in today's practice for both Hawks' PP units, I wouldn't expect too much. Someone should check to see that Quenneville or Smith or whoever's running this fucking thing isn't wearing a colander on their head.

This is where I start to grin a bit. While averaging close to 30 shots is pretty good for a team without any huge weapons, when you give up close to 32 per game you can't call yourself a great defensive team. You're a team with a goalie that's playing really well. Considering where the Hawks possession game has been the past month, I don't expect the Yotes to get to 29 consistently. And if they really do give up 32-35 shots per game, I just don't see them holding out against this much firepower.

Pretty much the beatdown it looks, as Hawks outshoot Yotes 35-16. Light up Jason Labarbera, which is kind of a thing you have to do.

I suppose this is one of the games that's making everyone shit themselves. It wasn't impressive, that's for sure. First game back after Circus trip which hadn't affected the Hawks in previous years but it was something they were sure quick to run to as an excuse. Smith only gives up the one but Hawks never really press him in a very tepid effort.

You may remember this as the game Jonathan Toews decided he'd had enough in the 2nd period and single handedly brought the Hawks back from three down in the 2nd period. Hawks actually mauled the Yotes for the final 40 but Smith did just enough to keep them out. Yotes then win home run derby.

Yeah, I know, ugly. Second of back to back after Crawford spit it in San Jose the night before and in the middle of the nine games of Lucifer. Probably wasn't even this close.

I don't really know that all that much can be gleaned from the regular season series. Each team whacked the other one at least once, one close game, and a couple times when the Yotes caught the Hawks at a perfect time. The only time Phoenix saw the Hawks when they were playing well, they were outclassed. Well, the Hawks are playing well now.

Conclusion: I'm sure after going player by player, which we will do starting later today, I'll have worked myself into a lather of paranoia that only McClure and Killion are going to be able to deal with, and probably not even then. But on the surface here, I just can't see what I'm supposed to be so afraid of. Yes, Smith is playing great and is a fine goalie. But he's got one less playoff win than Corey Crawford. Chances are, he's not '93 Patrick Roy. Just a hunch. The Yotes are not a great even-strength team, though not bad either. They shouldn't really be able to hurt you on the power play, and if the Hawks can even make theirs palatable, that should be a distinct advantage. They defend well as a team, but will still count on Michal Rozsvial, Rusty Klesla, and Adrian Aucoin to keep the Hawks 2-4th lines at bay, and I don't see it. They still need the Hawks to make enough mistakes to take advantage of, and I guess that could happen. But if it doesn't, there isn't enough here for them to create enough goals on their own.

I'm not buying it. Hawks in five, maybe six.